It’s been a while since my friend Scarybear contributed to the blog. He’s been pretty quiet lately, and I finally found out why. He’s been reading this humongous article written by Nicholas Wade about the origins of the COVID-19 pandemic.

Not to be outdone by Scary, I read the article too. It took me ages, and fortunately I was sober. At 10,000+ words, Wade’s article systematically examines the case for and against the suspicion that SARS-CoV-2 is in fact a rogue escapee from the Wuhan Institute of Virology.

At the end of Wade’s article he gave props to Stephen Quay, who published a 193-page Bayesian analysis of the virus’s origin and travel, which Scary and I are wallowing around in now.

As you may recall, Scary is obsessed with the apocalypse, so he didn’t mind the reading. It could be that his brain cells outnumber mine (I have just two). I started glazing over.

When I finished, I took some more lashings of armageddon via Sam Harris’s podcast: Rob Reid’s guest spot titled Engineering the Apocalypse. And while Scary said he already knew about and had contemplated everything Sam and Rob talked about, it scared the shit out of me.

A gain-of-function (GOF) experiment is one in which virologists work with existing viruses to make them mutate into stronger, more pathogenic, more transmissible versions by placing selective evolutionary pressure on them.

Why the hell would we do that?

The argument goes that if we can build a virus up to be its most bad-ass incarnation, we can understand it better and be ready to counter it in the event that it appears in nature.

OMG! Are we actually doing this?

You gotta know it. For example, in 2012, some scientists wanted to know whether avian flu (H5N1) could ever transmit to mammals. The only way to know for sure was to try and make it happen. So they took some ferrets and, using a technique called serial passage, they iterated and mutated the virus until—ta da!—it jumped species. Thus the bird virus “gained the function” of mammalian transmissibility.

Would bird flu have jumped to mammals on its own? Maybe. This experiment confirmed not that it would, but that it could—by actually making it happen.

Understandably, this freaked the scientific community out, and there was some debate about it, followed by a small moratorium and some beefing up of biosecurity precautions. (Grab a beer or maybe an Ativan—more on biosafety levels later!)

Virologists went on to reinvent the Spanish flu several times. Scientists mixed H5N1 with H1N1. Finally in 2014 the Obama administration imposed a moratorium (which would be overturned by Trump in 2017).

But these are experts

Years ago when Scarybear first started catastrophizing about GOF experiments, I told him to chill. After all, they were taking place in secure labs (duh!) and being conducted by geniuses with PhDs and great reasons for doing them.

But consider this: Lab leaks are not so uncommon.

In the 1970s smallpox got its ass kicked. It was a triumph for humanity. The last known natural case occurred in 1977.

But in 1978, a British lab leaked smallpox, leading to a curtain call for the disease in the form of an outbreak that took at least one life. That prompted the destruction of all but two live-virus samples, held in high-security labs in the US and Russia. (Of course, smallpox samples turn up occasionally when someone cleans out an old lab, and in 2017 Canadian scientists even figured out how to make it out of horsepox virus, should we wish to reconstitute it.)

In 2014 the CDC reported that 75 federal employees had been exposed to live anthrax instead of the deactivated samples they were supposed to be handling (oops).

And SARS has escaped from a lab on six separate occasions.

The very worst pathogens are stored and handled in biosafety level BSL-4 conditions.

In a BSL-4 lab you’re wearing a moonsuit. You’re being surveilled. You get a chemical shower when you exit, followed by a shower shower (Scary would hate that). And you can’t be a dumbass working in BSL-4. This is the world of Ebola, Marburg, and Crimean-Congo hemorrhagic fever.

BSL-4 allows scientists to work with the most deadly microbes. These are unequivocally deadly pathogens.

But in the more hypothetically deadly world of gain-of-function research, BSL-4 isn’t required; the work is usually done in BSL-3 or even BSL-2 conditions. As Wade describes it, “virologists worldwide don’t like working in BSL4 conditions.” Everything takes twice as long, and so there is a strong motivation to relax those rules, for the sake of getting the work done. Wade compares the biosafety level of the lab in Wuhan where coronavirus gain-of-function research was being done to that of “a standard US dentist’s office.”

What does this have to do with Moosehead beer?

Forgive me, my fellow inebriates, I know you’ve been wondering that. Moosehead beer has to do with Occam’s Razor—i.e., the principle of parsimony. The principle is basically this: THE MOST OBVIOUS ANSWER IS PROBABLY THE CORRECT ANSWER.

I had a lot of choices of different beers. You see, when my dad got COVID in March, our friends dropped off a cooler filled with random beers that they had acquired over the years for guests. Having been unable to have guests in 2020, these beers had languished in their spare fridge, and when my dad got sick, our friends figured those beers would make a good care package. (Amen!)

After my dad recovered, we wanted to reciprocate, so we bought our friends a case of their favourite beer, Moosehead.

However, our friends said they had stopped drinking Moosehead, so we ended up keeping the case.

So, when my head started hurting today after doing all this reading about lab outbreaks and infecting ferrets with bird virus, I decided a beer would help. But what beer? My two brain cells were tuckered out. All the exotic beers our friends had gifted us were … unknowns. And there were 15 cans of Moosehead. I chose Moosehead because it was the most OBVIOUS example of a refreshing Canadian beer that would remind me of watching hockey games and getting stupid outside on our deck. And it was CORRECT. I loved that can of Moosehead. I even poured it into a glass.

Often the most obvious answer is the correct one. I wonder about this as I rake through lab data and Wuhan subway maps and all kinds of stuff I barely understand. For example:

I’m not the only one who barely understands it. We all trust scientists to parse and translate this stuff for us. But I wonder—did scientists let us down when they shrank from Donald Trump’s assertion that SARS-CoV-2 came from a lab? Was that ideological—wanting to get as many miles away from him as possible? Maybe they could have distanced themselves from Trump without distancing themselves from … data?

If scientists are working on existing viruses all the time, making them tougher, faster, stronger, meaner …

And if history shows us multiple examples of lab breaches and screw-ups … couldn’t SARS-CoV-2 have been one of them? Is it that unlikely?

It looks just a plausible as the wet-market story. But what do I know? I have only two brain cells.

Some people aren’t shaking hands because of COVID-19.

I’m not shaking paws with people because everyone seems to be out of toilet paper.

And as my mum pointed out, bears like me are absorbent.

Luckily, we made our Costco run just before the madness started, so we have abundant TP. I reckon we should spend all the money we saved on booze. 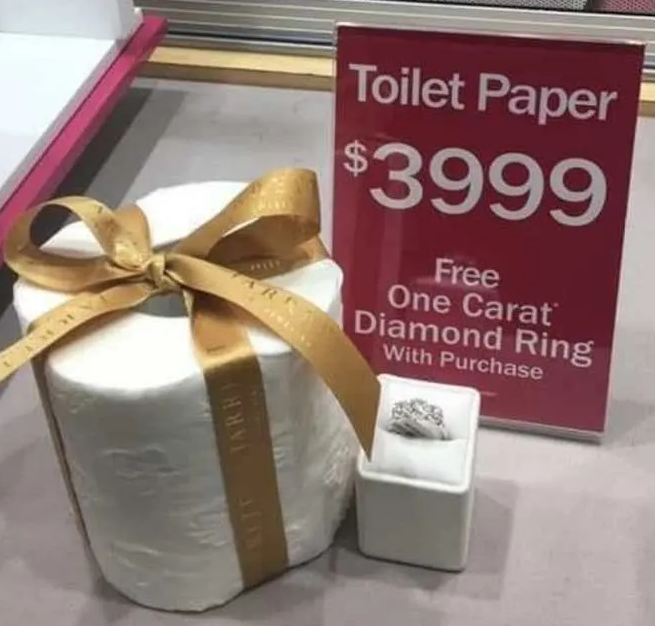