We bears were left to our own devices Sunday, as Dad was helping my uncle (he doesn’t know I call him that) mount a TV. I was resentful because (1) presumably there would be beer there; and (2) Fluffy had just destroyed our TV with his mind, and I wondered how my dad could bear to fondle another man’s television when our own was kaput.

Dad says Fluffy really didn’t destroy the TV and that I am just being a dick. Why would Fluffy destroy the TV? He likes TV. In fact, watching TV is the only activity that suits his catatonic demeanor.

Okay, so maybe Fluffy didn’t deliberately break our TV. He probably just hasn’t learned to control his mind powers yet. If he goes too long without letting off some paranormal steam, the result is a telekinetic ejaculation the likes of which might wreck a TV or a dishwasher without him actually intending it.

So we need a solution, otherwise all our electronics are in danger. What Fluffy needs is a controlled way of releasing his telekinetic energy and whatever other occult stuff he’s got going on so we can all live in peace. He needs his own Psychic Channel. 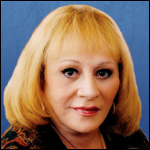 I contacted Sylvia Browne to see how she built up her psychic empire, not just because I don’t have a clue how Fluffy should proceed, but because I wanted to know if she, too, had been having difficulty blowing her telekinetic load before she founded her Inner Circle. But Sylvia Browne is huge! You can’t just send her an email. You have to use her corporate customer service form (unless, of course, you subscribe, in which case I’m guessing you could ask her a question, also for a fee).

As soon as I said Fluffy Bear’s paranormal activities had ceased, I knew it was a mistake. Sure, he’d been staring blankly at the wall for weeks without incident. Sure, the bumps in the night had settled into the normal noises of a 30-year-old house. But you never want to take the occult for granted.

I could kick myself for saying Granny had departed Fluffy’s body. Of course she hadn’t; the two of them must have been hibernating. Because as soon as I posted it, our television died. With one psychic zap, Fluffy annihilated our plasma, and now we have no TV. 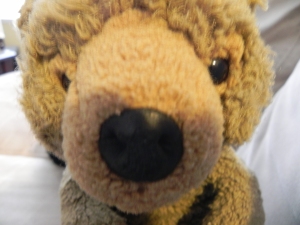 You are so dead, LB.

Scarybear is devastated. Television is his whole life, and naturally he’s pissed at yours truly for foolishly saying Fluffy had gone dormant. Of course he hadn’t!! If anything he was saving up his telekinetic powers. Who knows—maybe it was Fluffy who broke the dishwasher in October, and he just needed to recharge so he could attack the TV.

You never want an animal like Scary mad at you, so I offered him some ERRAZURIZ ESTATE RESERVA SAUVIGNON BLANC (2012). To this he made a politically incorrect limp-wrist gesture, and then kicked my ass. Scary isn’t very enlightened.

Too bad for Scary. This Chilean wine is crisp and zingy with hints of tropical fruit and sharp green apple. Produced from grapes grown in the Aconcagua Valley, a region thought for many years to be unsuitably hot, ERRAZURIZ proves naysayers wrong with its elegant and substantial (13.5%) Sauvignon Blanc. In perfect character for the varietal, ERRAZURIZ would be refreshing on a hot summer day or when you’re sweating after an ass-kicking. It disappeared very quickly at LBHQ.

Would we buy it again, though? It’s light, it’s zingy…but Scary may accidentally be right about it being too airy and bright—at least in winter. It’s certainly worth noting for when the hot weather comes.

As for Fluffy, he’s getting no wine. Seriously, he likes TV. The dishwasher he may not have given a crap about, but TV?? Breaking Bad? What the hell, Fluffy?