It may surprise you to know that there are a lot of bears on Facebook. Here’s the breakdown of my FB friend list:

The bears are usually the teddy variety, with a few wild bears here and there. Most don’t do much on FB; their humans have opened an account for them and seemingly been satisfied to leave it at that. Several are very active, and lots of them send me pics of themselves drinking, which I like. But for the most part FB friends come and go as in a slow-motion Twitter account. I don’t pay attention to the total number, but I do notice when a bear-friend’s account gets zucked, as happened to Boo Bear a couple of years ago. (He came back within a day, still wearing his coolest shades.) 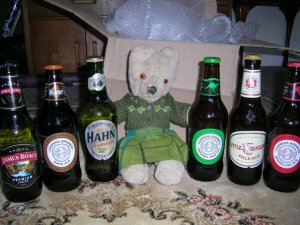 I live in perpetual terror of being zucked. Facebook policy forbids bears from having accounts, and The Facebook Effect author David Kirkpatrick repeatedly ascribes much of Facebook’s success to its insistence on verifiably authentic member names. But with 500M+ members, FB can only police its ursine underbelly so well. And honestly, some bears contribute more to social networking than some humans. Like Boo.

You won’t find Corporal James Shittington or Archie Candypants. Almost everyone is a human and an actual personal acquaintance. Her deviant complement is about half of mine, and would be lower if we didn’t count the ultra-religious right as part of that pie slice.

And this one from a monkey friend…

The actual numbers, too, are lower. Unlike yours truly, my parents don’t get random friend requests from entities such as “Bill’s Toaster Oven” and “Shite Sheep.” Nor would they click “Accept,” which I do. So they have about a tenth the friends I do, but arguably their friendships are somewhat more meaningful.

For instance, when a friend drops from my friend list, the reason is usually random:

My parents’ lists are therefore a bit more stable. Their friends don’t ordinarily get purged. They don’t rename themselves unless they get married or divorced. But occasionally they do decide my parents are idiots and hit the “unfriend” button.

This happened to my dad when one of his “friends” posted a gay-bashing status. When my dad challenged it, he was promptly unfriended for his intolerance.

As for my mum, she gets dumped here and there simply because she hardly ever checks in. Friends spring-clean their lists, ask themselves when they last talked, and she gets jettisoned. She could avoid this by posting a cat picture once a week, which sort of sums up the FB experience.

For some people, Facebook is a way of connecting with people they wouldn’t otherwise contact—a way of maintaining dormant relationships. For others, Facebook is a reflection of active relationships—if they’re friends with you on FB, chances are they also call you, email you, walk in the park with you. Which sounds exhausting.