The whole family went out last night. My parents had been in a funk all day; the kids were glued to Netflix and needed to be torn away somehow; and my dad had a restaurant gift card—so off they went without so much as considering letting me ride along in a purse.

When you’re left home alone with bears like Scary and Fluffy, apocalyptic thoughts are unavoidable, especially when you’re already feeling left out of an adventure. Scary doesn’t ever really stop thinking about the End of Days, and with a catatonic golem like Fluffy constantly beside him creeping everybody out, his weird-ass theories gain a little more purchase than they should. 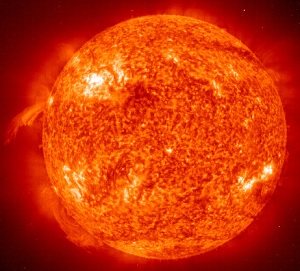 Why Scary thought of solar flares when it was pouring outside I don’t know. He usually gets anxious about the sun in hot weather, when he’s cooking inside his fur. With his great ass in front of the turbo fan, he blasts us all with his filthy funk and his insights about Armageddon, which, when the mercury’s over 95°, tend to involve the sun.

Not that Scary’s insights are conventional. Ask him about global warming and he’s likely to shrug. Ask him about rising sea levels and he might yawn. Insufficiently dramatic for Scary, these ordinary perils fail to pique his interest. And despite the apparent stability of our sun, midway through its life with a good 4 billion years left in the tank, Scary wonders if it plans to start behaving erratically in 2012.

There is some galactic precedent. In 1999 astronomers discovered explosive superflares had erupted from nine stars “disturbingly similar to our own sun,” all at least 100 light years away. Unlike regular solar flares, from which our atmosphere and magnetic field largely protect us, superflares are millions of times more powerful, brightening their stars by at least 20%, stripping planetary atmospheres (if any) and frying any inhabitants.

Bradley Schaefer, one of the scientists on the team, emphasized that “our sun does not do this, as far as we can tell.”

Scary scoffed at this reassurance, saying “It only needs to do it once. And then we wouldn’t be here to say it doesn’t do it.” He said the flares (“death flares”) could flash-fry distant Pluto, never mind us.

Throughout this Fluffy remained expressionless, a silent twin to Scary as he freaked me out, people. I thought I’d better contact someone with better credentials than Scary—maybe Bradley Schaefer.

Not one scientist or politician has ever responded to my emails. Truly, the only “official” person who gives me the time of day is Julia Gale of BROKER’S GIN. Just this week she sent a very slick newsletter full of pictures of the BROKER’S GIN tour of North America, which I do hope culminates in the reinstatement of that breathtaking elixir to our shelves. It’s just dreadful to think that if one of Scary’s death flares shot out from the sun all the gin would be instantly evaporated (along with our eyeballs).

I have to believe (and who knows, maybe Julia will agree with me; I emailed her about it too) that our sun will behave itself, although, being middle-aged like my parents, it conceivably will do something erratic. According to Sallie Baliunas at the Harvard-Smithsonian Center for Astrophysics, stars like our sun often dim down by 1% or so for a “quiescent” spell. Baliunas says 17 of Earth’s last 19 major cold episodes involved solar activity, so maybe Scarybear should think about that.

Maybe if we had an ice age Scary wouldn’t plunk his hairy butt in front of the fan and pollute the house with his funk.

An Earth Day shout-out to all my fellow inebriates: may your Earth Day be filled with planet-friendly choices such as the following:

No Thetans on me

And now a shout-out to those special inebriates who believe certain weird things about our planet:

Earthlings are infected by Thetans, evil souls loosed on the planet by the galactic hegemon Xenu 75 million years ago. If you suspect one of these entities is plaguing you, make haste to the nearest scientology outfit and pay $7,000 to get clear like Tom Cruise.

All plants, animals, and humans sprang fully formed into existence 6,000 years ago. For many this makes much more sense than the ridiculous scientific notions of evolutionary biologists such as Richard Dawkins who posit that life developed on a geologic time scale. Notably, these macro-evolution doubters usually hasten to the doctor for their annual flu shot because, dontcha know it, those germs mutate pretty darn fast.

The sun revolves around the earth. Don’t feel embarrassed if you believe this—you’re in good company. One in five adult Americans subscribes to this 17th-century theory. I bet most bears believe it too.

Global warming is a hoax. Deniers come in all stripes, although they’re usually not climatologists. Even a group of astronauts has gotten in on it lately, challenging NASA’s endorsement of the broadly accepted climate-change model. Perhaps those hungry for a good conspiracy theory should ask themselves what lobby groups are behind these movements to generate controversy where there shouldn’t be any. For example, Larry Bell, one of the most prominent climate-change skeptics in the U.S. and a Tea Party darling, has the support of Exxon-Mobil. Getting to the truth of climate change is like peeling an onion.

We can’t afford to stock our liquor cabinet. I call bullshit on this one, Dad.

I live for big parties like Mardi Gras, and I’m sad that it’s in the past. The worst part of it, though, is the concomitant idea that now, the Wednesday after, it’s time to behave ourselves. Apparently the big pig-out, love-in, and piss-up shindig was a kind of last hurrah that ushers in 40 traditional days of fasting and penance before Easter. OMG!

Despite having plenty of reasons to feel contrite (i.e., hung over), plus at least one parent who’s schooled in the Lenten ritual, plus a furry liver that’s pleading for a 40-day dry-out period—it just ain’t gonna happen, my fellow inebriates. Mardi Gras may be a fond short-term memory, but bourbon doesn’t have to be.

What is bourbon exactly?

I thought I knew, but it turns out I really didn’t. I tried to find some Canadian bourbon for today’s review. With all the grain in the prairie provinces, I figured we’d be a big producer. But I was wrong. It turns out that, for a grain whiskey to qualify as bourbon, it must:

I had no idea! This explains why I’ve never seen an Alberta bourbon. And it means the liquor I’ve been distilling in the toilet tank won’t ever legitimately bear the name “bourbon.” If I want to get serious about making my own, I have to move to the US—preferably Kentucky, where the hot-cold seasonal variation is ideal for barrel-aging bourbon, and where limestone water (void of iron, which can turn the bourbon black instead of lovely honey-brown) flows abundantly.

Without barrel aging, bourbon would just be a clear corn-based spirit—harsh and alcoholic. As awesome as that sounds, two to four more years in an American white oak barrel can change that spirit into something darker, softer, and more refined. Four percent of the alcohol evaporates each year (called “the angels’ share”), effectively reducing the bourbon and creating richer, more complex flavors.

My favorite thing about bourbon is the way, when you stick your nose into the glass you’ve just poured, it almost singes your fur off. I bet I’d enjoy that pre-aged bourbon—the pre-bourbon—even if I’d be robbing a few alcoholic angels of their 4 percent per annum. But I love the finished product.

I’m not so sure about moving to Kentucky. It sounds friendly there and all, but moving is a big deal, and I have one or two reasons, including Sarah Palin, to fear American life. But who knows? There’s plenty of corn growing everywhere (too much, as Michael Pollan argues in The Omnivore’s Dilemma, detailing the ascent of corn in an agribusiness agenda to push corn into every corner of our lives, if not every bodily orifice), and I found a barrel manufacturer who can supply the new, charred-oak barrels I’d need. And get this—at the bottom of the barrel maker’s web site is a charming little note:

For those of you who believe in man made global warming: When you buy one of our recycled Kentucky Bourbon Whiskey Barrels your [sic] are helping save the environment. By keeping these barrels at home we prevent the thousands of pounds of hydrocarbons that it takes to ship each of these barrels overseas from entering the environment. Hydrocarbons which may contribute to climate change.  Help save the earth, buy a recycled Kentucky Bourbon Whiskey Barrel today!

Isn’t it nice that with Kentucky Barrels you have the convenient option of opting in or out of the consensus held by credible scientists on anthropogenic global warming? Does it get any friendlier than that? Never mind the mind-boggling confession that it takes thousands of pounds of hydrocarbons to ship each barrel overseas.

I can’t wait for my toilet experiment to yield its alcoholic goodness and provide me with the mind-altering non-bourbon product I need in sufficient quantities to bring the ongoing neoconservative attack on science down to a dull roar, if only inside my own head. But at least I don’t have to observe Lent, which means Mardi Gras will continue at LBHQ for the foreseeable future.