The whole family went out last night. My parents had been in a funk all day; the kids were glued to Netflix and needed to be torn away somehow; and my dad had a restaurant gift card—so off they went without so much as considering letting me ride along in a purse. 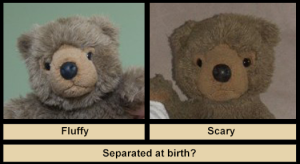 When you’re left home alone with bears like Scary and Fluffy, apocalyptic thoughts are unavoidable, especially when you’re already feeling left out of an adventure. Scary doesn’t ever really stop thinking about the End of Days, and with a catatonic golem like Fluffy constantly beside him creeping everybody out, his weird-ass theories gain a little more purchase than they should.

Why Scary thought of solar flares when it was pouring outside I don’t know. He usually gets anxious about the sun in hot weather, when he’s cooking inside his fur. With his great ass in front of the turbo fan, he blasts us all with his filthy funk and his insights about Armageddon, which, when the mercury’s over 95°, tend to involve the sun.

Not that Scary’s insights are conventional. Ask him about global warming and he’s likely to shrug. Ask him about rising sea levels and he might yawn. Insufficiently dramatic for Scary, these ordinary perils fail to pique his interest. And despite the apparent stability of our sun, midway through its life with a good 4 billion years left in the tank, Scary wonders if it plans to start behaving erratically in 2012. 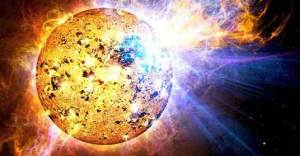 There is some galactic precedent. In 1999 astronomers discovered explosive superflares had erupted from nine stars “disturbingly similar to our own sun,” all at least 100 light years away. Unlike regular solar flares, from which our atmosphere and magnetic field largely protect us, superflares are millions of times more powerful, brightening their stars by at least 20%, stripping planetary atmospheres (if any) and frying any inhabitants.

Bradley Schaefer, one of the scientists on the team, emphasized that “our sun does not do this, as far as we can tell.”

Scary scoffed at this reassurance, saying “It only needs to do it once. And then we wouldn’t be here to say it doesn’t do it.” He said the flares (“death flares”) could flash-fry distant Pluto, never mind us.

Throughout this Fluffy remained expressionless, a silent twin to Scary as he freaked me out, people. I thought I’d better contact someone with better credentials than Scary—maybe Bradley Schaefer. 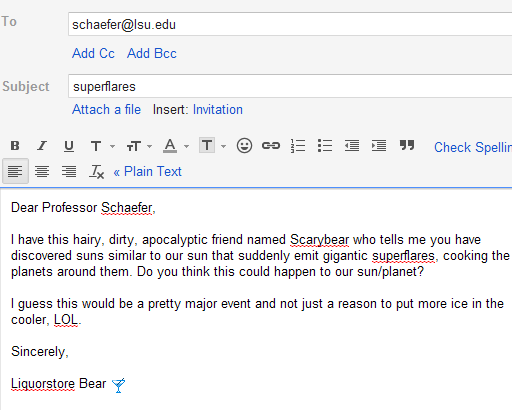 Not one scientist or politician has ever responded to my emails. Truly, the only “official” person who gives me the time of day is Julia Gale of BROKER’S GIN. Just this week she sent a very slick newsletter full of pictures of the BROKER’S GIN tour of North America, which I do hope culminates in the reinstatement of that breathtaking elixir to our shelves. It’s just dreadful to think that if one of Scary’s death flares shot out from the sun all the gin would be instantly evaporated (along with our eyeballs).

I have to believe (and who knows, maybe Julia will agree with me; I emailed her about it too) that our sun will behave itself, although, being middle-aged like my parents, it conceivably will do something erratic. According to Sallie Baliunas at the Harvard-Smithsonian Center for Astrophysics, stars like our sun often dim down by 1% or so for a “quiescent” spell. Baliunas says 17 of Earth’s last 19 major cold episodes involved solar activity, so maybe Scarybear should think about that.

Maybe if we had an ice age Scary wouldn’t plunk his hairy butt in front of the fan and pollute the house with his funk.

3 thoughts on “Can we really trust the sun not to cook us?”