An Earth Day shout-out to all my fellow inebriates: may your Earth Day be filled with planet-friendly choices such as the following:

No Thetans on me

And now a shout-out to those special inebriates who believe certain weird things about our planet:

Earthlings are infected by Thetans, evil souls loosed on the planet by the galactic hegemon Xenu 75 million years ago. If you suspect one of these entities is plaguing you, make haste to the nearest scientology outfit and pay $7,000 to get clear like Tom Cruise.

All plants, animals, and humans sprang fully formed into existence 6,000 years ago. For many this makes much more sense than the ridiculous scientific notions of evolutionary biologists such as Richard Dawkins who posit that life developed on a geologic time scale. Notably, these macro-evolution doubters usually hasten to the doctor for their annual flu shot because, dontcha know it, those germs mutate pretty darn fast.

The sun revolves around the earth. Don’t feel embarrassed if you believe this—you’re in good company. One in five adult Americans subscribes to this 17th-century theory. I bet most bears believe it too. 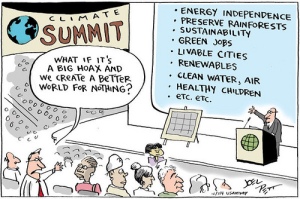 Global warming is a hoax. Deniers come in all stripes, although they’re usually not climatologists. Even a group of astronauts has gotten in on it lately, challenging NASA’s endorsement of the broadly accepted climate-change model. Perhaps those hungry for a good conspiracy theory should ask themselves what lobby groups are behind these movements to generate controversy where there shouldn’t be any. For example, Larry Bell, one of the most prominent climate-change skeptics in the U.S. and a Tea Party darling, has the support of Exxon-Mobil. Getting to the truth of climate change is like peeling an onion.

We can’t afford to stock our liquor cabinet. I call bullshit on this one, Dad.