There’s no way to know if Fluffy has finally settled down. You may remember, for several weeks after he came to live with us he made a whole bunch of crazy paranormal shit happen—noises, cold spots, clogged toilets, falling toys, leaving the lids off markers. He was totally freaking me out, people, obviously channeling the ghost of his old owner, my deceased granny.

But the creepiest thing about Fluffy is his weird resemblance to my friend Scarybear, who is himself a sociopath, albeit more of the snack-obsessed, openly violent kind. I usually avoid Scary so he can’t fill my furry head with apocalyptic ideas, but every weekend the household bears watch Fringe with my parents, which both feeds Scary’s Armageddon preoccupation and allows him to convey it to me. And because the weekend Fringe ritual is usually accompanied by a glass of wine, whatever End of Days scenario Scary decides to propound that evening gets pumped into my brain cells while they’re flooded with alcohol. 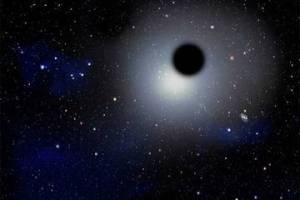 The wine was just finished when Scary mentioned rogue black holes. When you’ve just consumed the last drops of an organic Chilean Carmenere-Cabernet Sauvignon like EMILIANA NOVAS GRAN RESERVA (2010), you may well be feeling bereft of something precious and therefore, because nature abhors a vacuum (which my head usually is), susceptible to screwball ideas. Suddenly the 10 million black holes astronomers estimate exist within the Milky Way seemed exceedingly threatening.

Fluffy remained impassive as Scary went on about black holes, the corpses of stars gone supernova, hurtling through our galaxy and pulling everything, even light, into their city-size (that’s minuscule!) maws. Holy crap, I didn’t know which was more terrifying—realizing we’d have no warning if one of these tiny monstrosities caromed through our solar system, or observing a weird-ass golem like Fluffy staring into space while mass destruction was being contemplated.

Not even Scarybear stares into space! As dumb as he is, his eyes register something—some hint of thought if not intelligence. Not Fluffy, though. Look into Fluffy’s eyes and you see nothing—a vast depth of nothing.

So at least we didn’t have to share any wine with him. Intensely dark and substantial, EMILIANA NOVAS GRAN RESERVA Carmenere-Cabernet Sauvignon immediately hits the nose with ripe berries and spice, released from your swirled glass with a heady rush. My mum and I found it a glorious olfactory assault, but my dad was more reserved; it took the wine 20 minutes to seduce him, and by the time it did, we had a fair head start on him.

But can one drink a wine called NOVAS without thinking of supernovas and their dark legacies? Scary thought not, and weighed in on this unwelcomely, not feeling the least disqualified by his wine abstention to comment. No, indeed, if a rogue black hole headed our way it wouldn’t even need to enter our solar system to perturb the earth’s orbit, stretching it into an extreme ellipse or even detaching us from orbit and whipping it out into cold space. All this could happen very quickly, although there would be some time dilation close to the event horizon.

Scary seemed to relish this idea, Fluffy was completely indifferent to it, and I was freaking scared out of my wits. There was nothing for it but to attempt opening my grandparents’ homemade bottle so I could get thoroughly pissed. But I couldn’t manage it (as usual) and my parents refused to help. One of them said “There, there” and noted that at least the Milky Way’s black holes are mostly in orbit rather than pinging around the galaxy randomly, which was reassuring enough to quell my immediate worry and replace it with the persistent, ongoing one about Fluffy and his eerie agenda.