My dad has stopped tucking me in at night.

Now wait, you say. How many adult males tuck little bears into bed at night? Well, my dad for one. At least until last week. 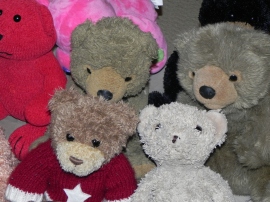 Waiting to be tucked in

So what difference does it make? you well may ask.

On lucky nights I’m too looped to notice. Other nights we’ve just watched something on TV—maybe a crystal meth dealer’s body being liquefied in an acid bath or some similar violent shit—in which case I stare at the wall all night afterwards, traumatized.

Up until last week, my dad used to get me settled for bed with the other bears he likes (plus Fluffy, who’s somehow gotten himself included). He used to make sure we were all comfortable and not too squished, then he’d put a blanket over us.

I’M NOT SAYING HE SINGS ME A LULLABY OR ANYTHING. HE DOESN’T FEEL MY FOREHEAD OR CHECK TO MAKE SURE MY NOSE IS MOIST. HE JUST USED TO TUCK ME IN!!

So what the hell, Dad?

Maybe running his own business lent itself to the sort of maverick mentality that says, I do what I want. Sure I tuck bears into bed—what’s it to you, mofo? And now he’s got this new corporate gig, he’s probably more like, I model and demonstrate best practices to help build accountability. His new coworkers play golf and video games while talking about their stereos.

Perhaps my dad is reassessing the machismo of tucking bears into bed.

But does this mean we’ll be buying more beer? I certainly hope so, and I’d be willing to trade my beddy-byes ritual for an extra case here and there. Perhaps another Whistler Brewing Company Travel Pack would be sufficiently manly for my dad. The four beers it contains are pretty mainstream (PARADISE VALLEY GRAPEFRUIT ALE being the one weird but good exception) and, while none of them will put a clump of hair on your chest, the collection is solid.

Naturally the BEAR PAW HONEY LAGER has extra appeal. Beer and organic honey make a win-win combo, even if their synergy occurs at only 5% alcohol.

The lager pours a crystal-clear copper with light foam that quickly dissipates. Honey is immediately apparent to the nose along with breadiness and faint hops. Taste follows smell without much surprise, supplying the expected honey along with some caramel notes and minimal hoppiness.

With a light-to-medium mouthfeel and reasonable carbonation, BEAR PAW HONEY LAGER is moderately refreshing but perhaps too sweet to pound endlessly (although I would without complaining). It has an unexpectedly long and dry finish, especially given its tendency to cloy at the front of the palate.

This would be an easy beer to disparage as too commonplace. It’s true the market is inundated with honey brews, but only because honey is such a delightful note to find in one’s beer. I’ve certainly experienced better versions of honey lager, but this one’s not bad at all. It’s certainly nothing for Whistler Brewing Company to be embarrassed of—not that anyone should be embarrassed of anything. Including my dad.

One thought on “WHISTLER BREWING COMPANY BEAR PAW HONEY LAGER—Unembarrassing, even if it won’t put hair on your chest”