In the bathtub this morning: the most massive silverfish ever witnessed at LBHQ.

A well-known screenwriting technique for making a character more likable is “SAVE THE CAT.” Early in the story, the character rescues something—maybe a cat. Maybe Stephen Harper rescued this cat from a tailings pond. Maybe?

I wanted to put it in a cat carrier and send it to Stephen Harper as a pet, but instead my mother took a shower with it. So immense and robust was the silverfish, she reported, that it would not be nudged by mere water down the drain. Instead it filibustered by the hole until she aimed the showerhead right at it.

Now, ordinarily I would prefer not to have a play-by-play of any of my mother’s nude activities. But I like to monitor our silverfish situation—for a while, you may recall, I thought Fluffy Bear was summoning the creatures from some nearby Hell Mouth. He seemed to be marshalling them for some sort of arthropodic assault, an insect-amplified grief cry for our deceased Granny, whose bear he was before he came to live with us.

But then my dad sprinkled some white powder (instructing me not to even think about snorting it) around the baseboards, and the silverfish disappeared. For the most part. Those that survived his poisoning emerged larger, stronger, and more apt to wrestle you in the shower.

I think you’ll agree, my fellow inebriates, that the foregoing ramble warrants wine on at least four counts:

Knowing that Stephen Harper probably wouldn’t think to reward us with, say, a bottle from the cellar at 24 Sussex Drive, I don’t feel so bad about failing to wrangle him a creepy new pet. Nor do I feel bad about busting the screwtop off a bottle of STARK RAVING RED. A big, jammy blend of Tannat, Zinfandel, Merlot, Cabernet, and Petit Syrah, STARK RAVING RED is gonzo with plums and cherries, filling the mouth with sweet, somewhat cloyingly boozy fruit. It’s not disciplined in the least, MFI, it’s in-your-face, as bold as a silverfish on steroids, but without scales or antennae. I liked it even though there wasn’t a chance of taming it, decanter or not.

Would I send a bottle to Stephen Harper? Not on your life. He probably drinks $100 wine every night. Nope…if I ever send him anything, it’ll be a cat-sized silverfish, and he can stroke it.

I spent all morning twitching with the urge to steal an idea from The Dissemination of Thought. Coupled with a Tannat-related headache and dehydration, this compulsion troubled me. I feel bad when I swipe things, and worse for not thinking of them first. But let’s face it—no one’s expecting nobility from an alcoholic animal. And really, it’s TDoT’s fault, isn’t it? If he hadn’t disseminated such a topical thought, I wouldn’t have felt like purloining it.

If you haven’t clicked the links yet, here’s the gist: There are types of Facebook users ranging from the Whinger to the Liker and everything in between—and those types are annoying.

I probably could have generated my own idea for the blog today had I not drunk so much LAS MORAS TANNAT (2008) last night. But I woke up with a rough headache this morning, which probably relates less to the wine than to the quantity consumed.

I’d never tried the Tannat varietal before—at least not knowingly, as it is typically a blending grape. Increasingly it’s being planted in Argentina, Australia and the US, though, so you’ll probably start seeing more Tannats on the booze-store shelves over the next few years. At 14% the Argentine LAS MORAS certainly caused bedspins and kept me from checking in with Facebook’s Wrestler Unstoppable, which meant my avatar “LB the Alcoholic Bear” got his ass kicked while I slept the wine off.

Our local booze-store consultant steered my dad toward this $14.99 product. She (and the bottle label) suggested decanting it an hour before drinking it, instructions my dad texted to my mum from the kids’ bedroom where he was patiently waiting for them to nod off, not knowing she would ignore her phone. So when he came downstairs the bottle was still sealed, and we commenced drinking it without letting it breathe. The wine did get a chance to open up over the next 90 minutes, but truthfully it didn’t change much in that timespan.

For full-bodied red wine fans, LAS MORAS won’t disappoint. Intensely dark with an admirable fruit/oak balance, it strikes a satisfying tannic chord with soft fruits up front and chocolate/bread in behind. If you love this note, you’ll be very happy, but if you prefer a wine that develops more dynamically in the glass and on the tongue, you’ll find yourself curiously underwhelmed by its lack of range.

Perhaps this explains why Tannat grapes are so often supporting players in cabs and malbecs rather than carrying the whole show. LAS MORAS lacks complexity; the sip doesn’t differ much from the swallow, yet it strums a fully satisfactory note. It would be a great wine for events where the focus is on socializing or a meal because it holds no surprises and it doesn’t assert itself in an intriguing way.

Much like most of the status updates on Facebook. My wrestler is just about the only reason I use Facebook. I update my status every few weeks or so, and of course I make a nuisance of myself with blog updates, but otherwise I barely pay attention to it.

When my parents first opened a Facebook account for me, they thought it was a pretty novel idea. Haha, look at that, a bear! Can you imagine? Bet nobody’s done that before! 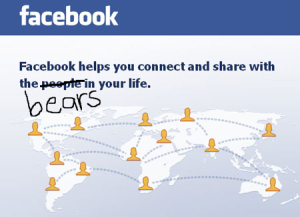 We quickly learned that plenty of people had done it before. Within a day I had dozens of friend requests from stuffies of every animal species. I couldn’t keep up, and actually stopped accepting them. So much for being original.

There’s considerable cross-pollination between categories—i.e. “Daemonic Bear” and “Archie Candypants” fall arbitrarily into the bear category, but they could just as easily be deviants.

You’d think the status updates would be pretty overwhelming, but it’s surprisingly quiet on my FB wall. That’s because most of the stuffie accounts are inactive; their humans opened the accounts many years ago for a giggle and never pursued it any further.

Which means most of the status updates I read are from Whingers, Likers, Lovers (thank you, DToS) and a few more additional ones that plague me in particular:

The Stuffie Lover. “Bunny wunny wuvz you, snuggwy wuggwy!” These animals have too much time on their paws. Like DToS’s Lovers, they favor the third-person. I wish they’d finally wear out the “W” key with their saccharine updates.

Posted to shock. Watch me shrug.

Danglers. “Going for medical tests today…” Um, so do you want people to ask? Are you going to live?

Threateners. “Time for a purge. If we haven’t talked lately, I’m unfriending you. Contact me if you want to stay.” OMG! How ignominious to be unfriended by you. Uh, who are you again?

Food Photographers. “Brining the turkey.” “Dogs on the barbie—mmmm!” I have no idea what some of these people look like, but for some reason I’ve seen their cookies.

Wingnuts who assume everyone shares their agenda. “Bleetched the sheat and dug out my pointty hat, y’all—who’s comming with?” Oh dear, when did I accept that friend request? I must have been on a red wine bender. Guess it’s time for a purge.

If you haven’t already checked out The Dissemination of Thought, what are you waiting for? Open a bottle of LAS MORAS TANNAT and sip contentedly. This wine won’t try to get your attention—it won’t distract you from this interesting and original blog.