In the bathtub this morning: the most massive silverfish ever witnessed at LBHQ.

A well-known screenwriting technique for making a character more likable is “SAVE THE CAT.” Early in the story, the character rescues something—maybe a cat. Maybe Stephen Harper rescued this cat from a tailings pond. Maybe?

I wanted to put it in a cat carrier and send it to Stephen Harper as a pet, but instead my mother took a shower with it. So immense and robust was the silverfish, she reported, that it would not be nudged by mere water down the drain. Instead it filibustered by the hole until she aimed the showerhead right at it.

Now, ordinarily I would prefer not to have a play-by-play of any of my mother’s nude activities. But I like to monitor our silverfish situation—for a while, you may recall, I thought Fluffy Bear was summoning the creatures from some nearby Hell Mouth. He seemed to be marshalling them for some sort of arthropodic assault, an insect-amplified grief cry for our deceased Granny, whose bear he was before he came to live with us.

But then my dad sprinkled some white powder (instructing me not to even think about snorting it) around the baseboards, and the silverfish disappeared. For the most part. Those that survived his poisoning emerged larger, stronger, and more apt to wrestle you in the shower.

I think you’ll agree, my fellow inebriates, that the foregoing ramble warrants wine on at least four counts: 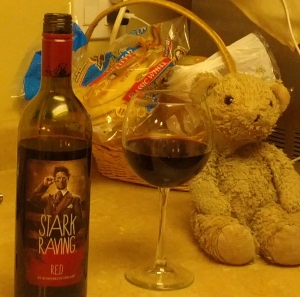 Knowing that Stephen Harper probably wouldn’t think to reward us with, say, a bottle from the cellar at 24 Sussex Drive, I don’t feel so bad about failing to wrangle him a creepy new pet. Nor do I feel bad about busting the screwtop off a bottle of STARK RAVING RED. A big, jammy blend of Tannat, Zinfandel, Merlot, Cabernet, and Petit Syrah, STARK RAVING RED is gonzo with plums and cherries, filling the mouth with sweet, somewhat cloyingly boozy fruit. It’s not disciplined in the least, MFI, it’s in-your-face, as bold as a silverfish on steroids, but without scales or antennae. I liked it even though there wasn’t a chance of taming it, decanter or not.

Would I send a bottle to Stephen Harper? Not on your life. He probably drinks $100 wine every night. Nope…if I ever send him anything, it’ll be a cat-sized silverfish, and he can stroke it.