Ordinarily I’d say you can’t watch too much Star Trek, but then you have bears like my friend Scary, who’s logged at least 10,000 hours watching every Trek iteration in addition to Stargate, Firefly, Battlestar Galactica, Andromeda plus every single other sci-fi program that every got green-lit for production. You could say Scary got sucked into another reality.

Scary used to lead a charmed life. Before his humans had kids they used to go to work every day. They’d leave Scary watching the Space Channel on a 50-inch plasma all day. They didn’t want him to be bored.

Then they had kids and suddenly the TV fell under new orders: Elmo, Sesame Street and Barney took over the screen, leaving Scary to wallow in his sudden secondary status and his sci-fi withdrawal. Feeling neglected, he became bitter, resentful, jaded. He became a dick.

With only his science fiction memories, Scary retreated into a dark world of apocalyptic fantasy and excessive snacking.

I invited him to join me in sampling Tree Brewing’s CUTTHROAT PALE ALE with me but he was too busy watching YouTube videos consisting of open sky shot in people’s backyards with some distorted (sometimes obviously modulated) audio behind—i.e., the strange sounds of 2012 that have gone viral recently. 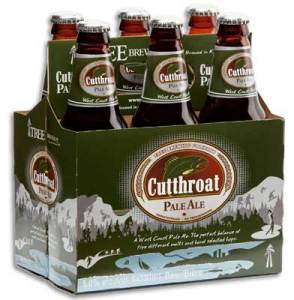 Luckily, the lovely Christine and my somewhat less lovely parents were there to open the CUTTHROAT bottles.

I’d recently tasted THIRSTY BEAVER AMBER ALE, a delightful but more mainstream offering from Tree Brewing, so I was buzzing with anticipation and the usual alcoholic jitters. I realized I didn’t miss Scary’s company; with his End-of-Days mentality and general paranoia, he’s not the sort of guy you should take along on any sort of mind-altering odyssey. Although in lots of ways I share his fascination with the apocalypse, I don’t think it’s going to swoop in on a seven-headed dragon the way he does. Plus there was more beer for me and the humans without him. 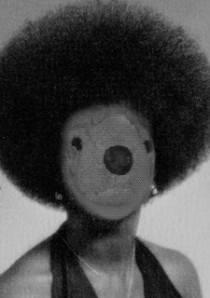 Poured into the glass, CUTTHROAT PALE ALE is golden orange with a foamy head that dissipates quickly. Right away the aroma is intriguing: malty and grassy with suggestions of caramel and buttered bread. So the actual first sip is disconcerting—instead of the mellow, malty flavor I’d expect from a pale ale, CUTTHROAT jabs you with hops and an aggressive carbonation level that actually challenges the palate to reconcile its one-two-punchiness with the delectably gentle malt promised to the nose.

It’s kind of fisty that way really. Everything olfactory tells you you’re in for a soft, caramel-tinged sipper, and then CUTTHROAT yanks your arm up behind your back and says very threateningly, “Bend over!”

Because it’s really much more of a bitter than a pale ale. The hoppy profile would appeal tremendously to IPA fans as well as classic bitter drinkers. After a quick adjustment of expectations the hops are in fact delightfully clean and fresh, not to mention perfectly appropriate for the fizz level.

The finish is very dry and long. At first my impression was OMG, what was that? but halfway through the bottle I was smitten with CUTTHROAT and couldn’t possibly begrudge its take-no-prisoners assault on my tastebuds. It’s a fantastically violent beer that, in all honesty, Scary probably couldn’t have handled.

As Christine said approvingly, “It is called CUTTHROAT, after all.”