Usually my dad and I get to bogart all the India Pale Ale that enters LBHQ. My mother’s marshmallow tastebuds can’t tolerate IPA’s “earwax and elastic band” topnotes and she has no comprehension of how symphonic a good IPA can be. So when my dad brought home INNIS & GUNN TOASTED OAK IPA, I thought we’d be safe from sharing with her. Together we could drink in peace and scratch ourselves as much as we liked. 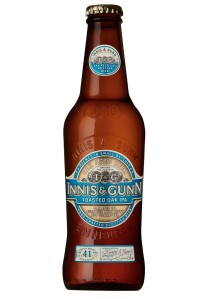 Boy, was I wrong. Not only did Mum like INNIS & GUNN TOASTED OAK IPA; she bellied up to the counter with us and took half of our precious beer! Then she proceeded to marvel about the lack of earwax and elastic bands, the appetizing crystal-gold pour, the complexly hoppy aroma, the delicious toasty taste with buttery golden-rum asides, the refreshing mouthfeel, and the lingering bitter finish! OMG, my fellow inebriates, why didn’t my dad buy twice as much INNIS & GUNN TOASTED OAK IPA? Then we could have at least knocked my mum out (or wait—maybe not … only 5.6 percent alcohol).

Lest you think Dad and I don’t like Mum—it’s not really like that. We just like keeping all the IPA for ourselves. Dad and I (and Scarybear) take the IPA down to the movie room and watch action movies, knowing she won’t go anywhere near us or our beer. We thought we had a good plan with INNIS & GUNN TOASTED OAK IPA! We had Transformers: Age of Extinction all lined up! And suddenly there she was with us, suggesting we open a second bottle and discuss books or something. OMG!

Weirdly enough, though, the more INNIS & GUNN TOASTED OAK IPA we drank, the more my mum started to seem okay—after all, she was being liberal with the bottle opener. And so I thought, too bad for Scarybear and the Transformers movie, but having a couple of IPAs with my parents ain’t that bad.

And then the kids came charging out of their room, seized me from the counter, and dressed me up like a superhero.

And that, my fellow inebriates, was the last sip for me of INNIS & GUNN TOASTED OAK IPA.

In the downstairs bathtub this morning: two of the meatiest, most massive silverfish ever seen, squaring off with a hefty spider. Suspended above them by an invisible thread: the exoskeleton of one of their mates, presumably tortured to death by the spider.

Damn it, Stephen Harper, keep your pets on a leash.

Of course I wanted to see who would win. But my mother didn’t care. “F**k you guys,” she said, and shot all three down the drain with the showerhead.

That’s the level of enlightenment at LBHQ.

So I had to wait until 5:00 pm to try this new beer in the fridge: Parallel 49 FILTHY DIRTY IPA. And even then I had to fight my dad for a share of it, which felt sort of like being a silverfish versus a big-ass hairy spider. But fight my dad I did, my fellow inebriates, and here’s what FILTHY DIRTY was like:

Ahhh! Let me start with 7.2% alcohol. It had me there, friends, but it was only getting started. FILTHY DIRTY boasts an IBU of 55, the combined effort of Chinook, Centennial, Citra, Simco, and Ahtanium hops—not fighting it out but harmonizing into a piney, grapefruity, bittersweet hopfest with a creamy mouthfeel and a long linger. My dad and I marveled at the various hop contributions; as we savored the IPA we could taste tropical notes and subtle bready malt backnotes. It was totally, totally yummy.

My mum said it tasted like elastic bands and earwax, which is what she says about all IPAs. We called her a philistine and suggested she get into the kitchen and make the family some pizza.

And that, my fellow inebriates, was a lot like picking a fight with a big spider. Don’t even ask who won.

My judgment is feeble at best, my fellow inebriates, so when Scientific American emails me about a once-in-a-lifetime chance to see Venus transit  the Sun, appearing as a small black disk in front of our blazing star, I’m not sure if SCIAM is advising me to look at it.

All my instincts are telling me it’s not okay to stare at the sun, but I’m thinking maybe I can get away with it just once. Venus won’t do this again until 2117. Astronomers are excited by it because it illustrates the way they find exoplanets orbiting distant stars—by the planets’ silhouettes.

I asked my friend Scarybear whether I should look at the sun* to see the Venusian disc. He said I definitely should**, for long enough to adjust my eyes to the glare and then a bit longer to make out the small dark spot. He said it would be “the coolest thing ever.” When I asked him if we need to put a special filter on the telescope, he shrugged and said that my eyes would “probably heal pretty fast.” 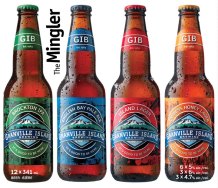 And the winner is…the lager.

Sounds like a plan. After all, a solar filter for our telescope would probably cost more than a few cases of beer. Between a filter and another GRANVILLE ISLAND BREWING Mingler pack, I’ll take the beer.

And while I wouldn’t gravitate toward an entire case of BROCKTON IPA, I don’t mind finding three of them in the Mingler. Sometimes an India Pale Ale provides just the bracing, hoppy kick in the head that a bear needs.

Deep golden with white foam, BROCKTON IPA gives off a strong, earthy aroma—hoppy, bready, and slightly astringent. The taste is more bracing than the smell, with pine notes and hops front-and-forward but some malty caramel notes balancing it somewhat. With moderate carbonation and substantial weight in the mouth, BROCKTON IPA finishes with a lingering, satisfying bitterness.

IPA isn’t a style we seek out too often at LBHQ; it always seems off-kilter with its emphasis on hops at the expense of milder front-palate-pleasing flavors. And BROCKTON IPA is an example of a beer in which hops pretty much beat the shit out of the other taste sensations, not to mention the drinker. But sometimes you need a beer that kicks your ass, and when you do, one like this is great.

We could buy four cases for the cost of a solar filter! I mentioned this to my mum, who had no idea why I would posit the comparison until I told her I was following Scary’s advice to watch an unfiltered Venusian solar transit*** while pounding cases of IPA.

For someone who doesn’t like using the word “retarded,” she sure unleashes it on me a lot.