Last year I made my very own cream liqueur, combining full cream, cheap Canadian rye whisky, and melted Hershey’s Chipits. The recipe was a grand success, and even if it did languish in our fridge until clumps collected at the bottom of the jug, it was only because my parents/co-chefs could not conceive of the cream staying fresh long enough for us to consume it at a moderate rate rather than binge-drink it before the cream’s “best before” date. (I know, right? How could they not understand that whisky kills EVERYTHING?) 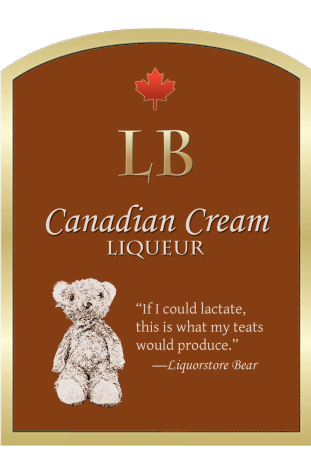 I was so proud of our homemade booze.

My homemade liqueur’s label may also have played some small part in its relegation to the back of the fridge—you be the judge, as I don’t have a marketing degree; I’m just a small bear with two brain cells. But whether or not anybody deigned to drink it, I considered our Canadian Cream a glorious concoction, worthy of a second act.

Now, Hershey’s people, if you’ve ever had this particular hooch, you know it’s coffee-flavoured. So my mission this Christmas was to combine coffee-type ingredients with, well, any kind of hard alcohol.

My first impulse was to use actual espresso, brewed in a stovetop Bialetti. But my mother, who is lazy, instead presented me with a bag of coffee-flavoured Chipits. These, she said, we could melt the same way we’d melted regular Chipits for our Canadian Cream. It would be faster, the melted chips would impart a creamy mouthfeel, and no one would have to bounce off the walls after drinking the leftover espresso.

“Awesome,” I said, and got the vodka ready. This involved beating a plastic mickey against a table until the cap broke off. (I don’t have any thumbs.)

Meanwhile, my mother melted the coffee-flavoured Chipits. (I am not allowed to use the stove because I am irresponsible.)

As your product melted (correctly, in a double boiler), a most offensive odour began to drift through our kitchen. “That,” I said, “does not smell like coffee.” Yet, in a weird way it did. But in an even weirder way, it really did not. I peeked at the ingredient list:

OMG, Hershey’s! Notice anything? Like…pssst! There’s no coffee in these coffee-flavoured Chipits! Not a bean!

How in the name of all that is furry can I make my own Kahlua with these weird little palm kernel oil pellets that contain no coffee? Holy crap, Hershey’s, it’s a Christmas miracle that there’s even COCOA in them!

So here’s what happened next: My Kahlua knock-off project got aborted! Which left me with a bottle of vodka to pound. In other words, it was a win for me.

Not so much for my mother, though, who foolishly used the melted Chipits to make a cheesecake for Christmas dessert. Go figure, she thought those freaky little coffee-fakers would blend into the other ingredients and perhaps mellow out. But OMG, no. They did not mellow out at all. In fact, just one cup of those wretched little coffee-flavoured Chipits ruined dessert—every single guest left it uneaten! Not even to be polite would they eat that cake.

Those coffee-flavoured Chipits are an abomination.

So anyway, Hershey’s, you kind of wrecked Christmas dessert for us, which meant we had to get drunk instead. Which, in all honesty, I didn’t mind, but my family thought it kind of sucked.

2 thoughts on “CANADIAN KAHLUA—Doomed by Hershey’s!”