While I was writing a rant to Hershey’s Canada on Friday, my mother was writing a tediously polite letter. She received the following reply: 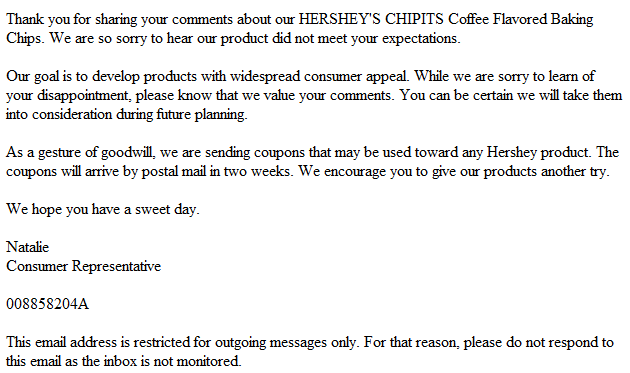 Not reading that bit at the end, my mother did send a reply, which no doubt has gone into the void. How, then, to contact Natalie of Hershey’s to say what we really think of coupons (which, far from transmitting goodwill, keep us on the hook for more product)? Who knows. So we’re escalating things at LBHQ. When you want something done, ask Liquorstore Bear, right? And he’ll do it, unless he’s passed out. 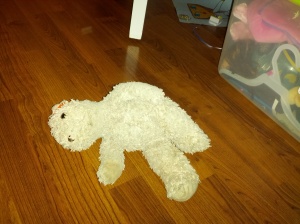 Thank you for offering my mother coupons to buy more of the product that caused my “Homemade Canadian Kahlua” project to be aborted, and resulted in an inedible cheesecake that offended the foodies in our house so very much.

I’ll be straight up with you. Personally, I didn’t care about our Christmas dessert. Neither did the kids, who prefer to binge on Wagon Wheels or other laboratory food. And the Kahlua wasn’t a big deal, because I got to drink a mickey of vodka instead. But coupons? OMG, Hershey’s, we struggle with the whole idea of coupons here. Heavy coupon use is a socio-economic marker we actively resist, living as we do in a demographic pocket of crazy-ass creationists and Honey Boo Boo devotees. We simply cannot embrace coupons, even if they save us money.

Now, Hershey’s, I don’t expect you to be sensitive to our squeamishness about couponing (it’s a verb if you have a basement full of toilet paper and cream rinse). You’re a gigantic company caroming around like a veritable galaxy absorbing smaller companies in hostile takeovers—who can blame you, with your surely rabid shareholders, for attempting to make a coffee-flavoured product without including any coffee in it? Not to mention, your administrative staff probably has its hands full quelling Urban Dictionary–style “word outbreaks” involving your brand. I can’t imagine what it does to your Twitter feed when someone coins a new Hersheyism. 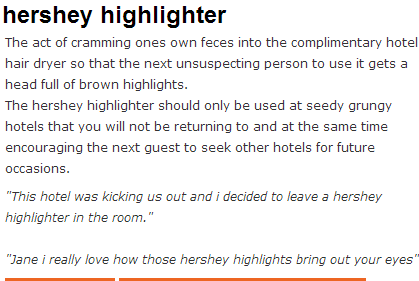 Lastly, I totally understand the “do not reply” response letter you sent to my mother. If she did want to reply (and idiotically she did)—I mean, if she wanted to reply and know that someone would receive it—she would have to fill out a dozen or more fields on your customer log-in screen, then type her message into one of those little boxes that go to a person like Natalie whose job it is to mollify angry bakers at the least expense possible. If I received as many hate letters as Hershey probably does (especially, I would imagine, from seedy, grungy hotel owners), I’d hire a nice person like Natalie to mail out coupons as well.

What am I trying to say, Hershey’s? Bottom line: I’d be happy with some vodka, and my mum would probably be tickled to receive some good old milk chocolate Chipits (she’ll probably just pour them into her mouth). Or, if you have any other weirdo flavours, you could send us those. Do you have Bailey’s-flavoured ones? We would probably like those, unless they happened to be made without Bailey’s.

I’ll let you get back to your Twitter feed, my Hershey friends. Over and out.