You’d think I’d get more comments like the one I received last night from one Robert Richard, aka “Nice Chrstian [sic] Guy.”

I’m offended by your use of the name Jesus in this way. Obviously you are ignorant of the diety Christ holds, obvious you are ignorant of the consequences you will face because of your insubordination. It is a terrible thing to fall into the hands of God! Really! He doesn’t mess around and YOU need to backtrack and rethink your foolishness.

Who knew Christians stayed up so late? The comment is in response to this picture and the title “Fix It Jesus-Style”: 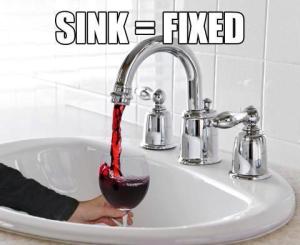 Robert’s message is the kind of comment that actually makes my fur hurt. I guess I’ll just go through it bit by bit.

I’m offended by your use of the name Jesus in this way.

What are you doing on my site, dude??? What are you looking for? Doesn’t the Bible forbid drinking? Are you scanning just in case there’s a review for O’Doul’s? (There is.)

Okay, so, Robert buddy, being offended is a choice. It’s not like having your leg broken. It’s your chosen reflex to something I published for an audience that is not captive. (I have the crappy site stats to prove that.) 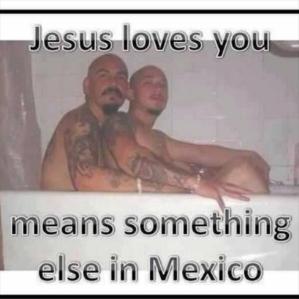 Obviously you are ignorant of the diety [sic] Christ holds…

I guess this is where Liquorstore Bear gets definitively outed as an infidel. But here’s the thing, Robert dude…I just don’t know. I guess you could say I’m a

Right? I totally don’t know. But you don’t know either. So you can believe what you want and it’s cool. As for me, well, we probably won’t run into each other at any barbecues, will we? So it’s probably cool if we just leave each other be.

Oh yeah. It’s spelled D-E-I-T-Y. And I’m not actually ignorant of the fact that many, many people believe in the divinity of Christ and consider Christ a deity. (Got that usage? Tricky, right?) Again, totally cool with me.

The humans at LBHQ were actually raised as Christians—one Catholic and the other a more vague, inclusive flavor. We have a bunch of well-read Bibles and plenty of Christian relatives with whom we coexist pretty peacefully.

Going back to ignorance, there is a difference between being ignorant of the fact that people believe Christ is a deity and the “fact” that he is one, which you cannot know for sure (and nor can I). You cannot be ignorant of a non-fact. Your accusation of ignorance is tantamount to saying I’m ignorant of the fact that blue is the nicest color. (But don’t worry, Robert, there’s a laundry list of stuff I don’t know shit about, like quantum physics, how to index a book, why my homemade liqueur has curds…)

…obvious [sic] you are ignorant of the consequences you will face because of your insubordination.

You do mean in the afterlife, right, Robert? You’re not going to throw a brick through the LBHQ window or anything? And…oh yeah—insubordination to what? If you mean insubordination to you, then I guess I’ll have to hunt through my files to see if I’ve agreed to be your employee (or did you mean slave? because the Bible’s okay with that). But if you mean insubordination to God, then maybe you and I should both leave it to God. Even though he’s probably busy and whatnot, I’m sure he’ll get around to punishing me when he’s ready. As long as you don’t mind waiting. You seem kind of eager, Robert.

It is a terrible thing to fall into the hands of God!

I thought God was supposed to be nice. Especially NT God, who seems like a mellower, middle-aged sort of God whose prefrontal cortex is fully on line now so he doesn’t get sudden nasty impulses. You make falling into his hands seem like getting mugged or something, Robert.

Really! He doesn’t mess around and YOU need to backtrack and rethink your foolishness.

Dude, he totally messes around. Look at the way he messed around with Abraham that time. Kill your son! Oh wait—I was only messing around, let him go. Throughout the Bible (Leviticus, anyone?) God tells people to do horrific things. (That’s what I meant about OT God as opposed to NT God—he was off the hook in ancient times, right?) If you don’t think God messes around with people, check out what he asked Noah to do.

Okay, so I know this is low-hanging fruit here and only adherents to a literal interpretation of the Bible will be offended by it (um…why are you here??). For many people, faith is totally compatible with science and modern life—and kindness, compassion, openness to other people’s opinions, a sense of humor—you name it.

So how would I backtrack? I’m a pretty dumb animal, I admit it. To give you an example, for a long time I thought water was poisonous. I’m a total idiot. But I try to be open-minded. So I’ll keep thinking about how to be less foolish. Will you, Robert, give some thought to how you can be more of a

and more open-minded, instead of threatening small bears who don’t have a chance of getting into Heaven anyway because Heaven is reserved for human beings and not dumb animals?