Last night an animal clawed through our garbage. Presumably it was a raccoon, but it could also have been Scarybear. Or it could have been the neighbors’ cat Cuddles, a monumentally dense animal that refuses to exit our driveway when Dad backs the car out.

One day the kids drew a chalk circle around Cuddles, who stayed within it for the whole afternoon and was still there when Mum called everyone for dinner. Trapped by its magic boundaries, Cuddles seemed indifferent and probably would have loitered all night, but I’m guessing Fluffy tapped into some higher evil realm and released her with his mind while the family was eating. Fluffy may well have empowered Cuddles to ravage the trash as well, although she seems a bit dumpy for that level of exertion. Scary isn’t known for physical feats either, and he doesn’t smell any more garbagey than usual, so it probably was a raccoon.

My dad’s job tonight is to stay awake until the raccoon comes back. If he can catch it in the act, slay it, and skin it, then Mum won’t need to buy stewing meat for the YELLOW TAIL bourguignon she’s planning. A barely touched 2010 Cabernet-Merlot has been languishing at LBHQ since our very good friends brought it over for dinner, unwittingly violating three rules about wine labels:

Call my parents snobs (not me! I wanted to drink it) but they avoided consuming YELLOW TAIL even at the cost of remaining sober throughout the evening. They’d better hope our friends don’t read this review, because they slagged that wine. This is what happens when you get picky about wine: it ruins your appreciation of cheap wine and turns you into a pretentious douche who decides to make beef raccoon stew instead of knocking the YELLOW TAIL back with your favorite little bear. 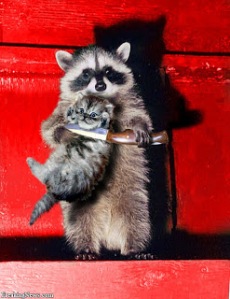 Let’s hope Cuddles doesn’t encounter the raccoon. Come to think of it, we haven’t seen Cuddles for a few days…

If my dad succeeds in catching the raccoon, justice will be served in more than one way. Not only will he punish it for strewing our trash all over the street and causing the garbage dudes to reject it (which means we have to guard it from raccoons for a further week), but he’ll punish raccoons as a species for shredding the swimming pool in the back yard of the very neighbors who brought us the YELLOW TAIL!

I don’t know what sort of weapons my dad will use against the raccoon. I don’t like thinking of its furry bandit face getting brained by a shovel or choked by a length of Monster Cable. Let’s hope he does it quickly so the animal doesn’t suffer. Dad probably doesn’t want it caterwauling in our driveway at 3:00 a.m. either, especially since we’re new to the neighborhood.

He’ll have to bleed it out properly so the meat doesn’t get ruined. Whether this is a family-friendly activity remains to be seen, but I’m guessing the kids will wake up and want to be part of it.

As for your humble bear, I will be nowhere near this action. I don’t eat stew. I sympathize with animals. I want to drink the YELLOW TAIL CABERNET MERLOT. Yes, it has a schoolhouse grape-juiciness, lacks any depth at all, clouts you over the head with tannins, and features a stylized kangaroo leaping beneath a crayon-blue banner. All these characteristics say to me easy drinking, fun, approachable, chill-out wine. To my mother they say (beef) bourguignon.

So it’ll be a big surprise for her when Dad emerges from his dead-of-night scuffle with a reeking freegan trophy. She’ll swoon when he plunks it on the counter for her to butcher. And she can tell our good friends with a wink, “That YELLOW TAIL did not go to waste.”

4 thoughts on “3 rules about wine labels, and what happens when you violate them”