The kids went to Frog Search today, where they scooped tadpoles and salamanders out of a swampy pond, inspected them under microscopes, sorted them into categories, then sang a song to them as they released them back into the water.

What you lookin’ at?

I asked the frog who lives at LBHQ what he thinks of Frog Search.

He said something unintelligible.

I asked him again.

I think he said ribbit.

The frog who lives here doesn’t have a name. Despite being cuddly and soft he’s not, er, an A-list animal; the kids haven’t bothered naming him, nor do they notice what he’s up to. 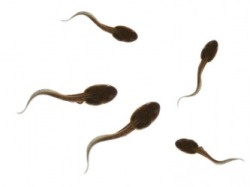 Pollywogs who haven’t learned to cuss yet

I asked him again what he thought about dozens of kids plunging empty bowls into his habitat, capturing whatever was unlucky enough to whoosh into the bowls, and then bothering the organisms for several hours before chucking them back.

I thought he said ribbit again but when I queried more closely I realized he’d said motherfuckers. I know, the two words couldn’t be more easily distinguishable, but I was hammered, my fellow inebriates, and for all I know he said antidisestablishmentarianism.

Turns out he did say motherfuckers. He took pains to clarify for me: Goddamn motherfucking nature-walk assholes pluck my tads out of our fucking habitat—what the fuck do you think I think of it, you stupid bear?

So then I felt a little bad. I’d thought maybe it was a bit of an adventure for the ’poles—like the time I woke up with that skull-shaped vodka bottle and drank it all at once.

Did he realize, I asked—the kids sang a song to the tadpoles before tossing them (mostly underhand) into the pond?

The frog told me to go and beat off. (I know, right?! Holy shit, that’s what happens to animals who don’t get loved enough.) So I decided to split a GRANVILLE ISLAND ENGLISH BAY PALE ALE with him. Don’t ask how we managed to get it open; frogs are resourceful enough creatures that they can switch gender; opening a beer must be child’s play.

We used to buy ENGLISH BAY PALE ALE all the time until my mum decided she liked SLEEMAN HONEY BROWN LAGER better. The two beers share similar characteristics; both are highly accessible mass-market-yet-purportedly-micro-style beers that give consumers a bit more than the high-pitched metallic assault of a typical macro brew. They are, if anything, transitional beers that pave the road between craft and macro styles. More expensive, higher quality, but not precious, and not odd. Very mainstream. 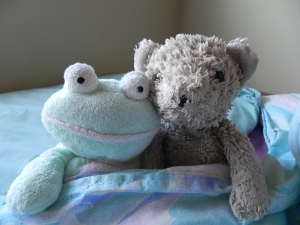 I thought the frog would like our beer. It pours a lovely copper-amber on the slightly translucent side, with healthy white foam that dissipates fairly quickly. The aroma is earthy yet toffee-like, following through with a lovely malty, honeyed taste with lingering but mild hoppiness. With moderate carbonation and satisfying mouthfeel, ENGLISH BAY PALE ALE is generous and appealing, although it might not be interesting enough to have a session with. I didn’t want a session and the frog sure didn’t (he said it didn’t taste at all like flies and was therefore just okay). It did make him stop cussing, so it was good for me in two senses.