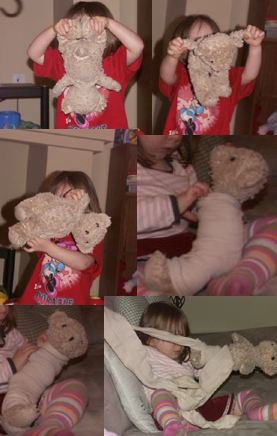 A lot of child abuse goes on at my house, by which I mean I suffer a lot of abuse at the hands of children. I feel compelled to clarify this just in case some well-meaning Canadian Conservative (is there such a thing?) googles the term and arrives here—which is plausible, given that someone googled “omg is a shit” this morning and ended up here of all places.

I bet a lot of people are googling terms like “child abuse” and “child pornography” today because of the online surveillance bill Conservative Vic Toews is getting ready to shove down Canadians’ throats (or up their asses, if you prefer it more pornographically). Toews believes that failing to adopt legislation that provides police and intelligence agencies with access to citizens’ telecommunications and subscriber data, “will in fact allow child pornographers and organized crime to flourish.”

The legislation doesn’t personally freak me out. Everything at LBHQ is pretty much PG-rated, my parents lack the energy to do anything dangerous let alone criminal, and we are solidly opposed to child abuse (although curiously silent on bear abuse). But I hate to think that you or I, innocently googling for legislative news this morning and entering the term “child pornography,” could end up on somebody’s watch list.

Says Toews, “the focus here is the protection of children,” yet the bill refers to children in title only; they are not mentioned within the text, suggesting that the topic is a red herring—a hot-button topic that will wedge open the doors to our private lives.

It’s not the first time the Conservative (or the Liberal) government has tried to pass a bill like this. Under the proposed legislation, telecommunications and internet providers could be forced to provide police and intelligence agencies with subscriber data, back-door communications access, and information on private transactions—all without a warrant. Telcom providers would have 18 months to build spy capabilities into telecommunications products enabling authorities to track people any time, without demonstrating the need to. Even more disturbing, Toews defended the bill by saying its critics could “stand with the child pornographers.” Is there no middle ground?

If this were just about me, my family and our boring private lives, I wouldn’t care. But I do care that the government is using an emotional issue in an if-you’re-not-for-us-you’re-against-us bid to gain control of private information that it could not justify otherwise. Similar to the security crackdowns that occurred in the US after 9/11, the bill is an opportunistic and fear-mongering grab for control.