By the end of his weekend bunkbed-building project, my dad was sweating. He totally deserved a beer. After all that effort, I thought he deserved something really extraordinary, but instead he chose a can of crappy (well, not crappy—at first I liked it, but then I had it again and I didn’t so much, expect that it’s good for getting gooned) beer. Seriously, if that’s what my dad gets for putting together a JYSK bunkbed set in under two hours, he has some self-esteem problems.

If it were up to me (and it never is) we’d at least shake the piggybank out for some LUCKY COUNTRY SHIRAZ GRENACHE (2009) from Australia’s famed Barossa Valley. Now, maybe the $17.99 price tag was a deterrent after my parents had shelled out $240 at JYSK. But how could it be? As financial ignoramuses (and they are), my parents should have been fully susceptible to the “anchoring” effect of just having spent a wad of cash. Spend $240 and suddenly $17.99 doesn’t seem like much. Ergo, there should be a bottle of LUCKY COUNTRY sitting at LBHQ right now, on its way to being empty.

It’s true—experiments have shown that consumers are highly suggestible when it comes to price points. Dan Ariely and Drazen Prelec did an experiment in 2006 in which they had MIT students bid auction-style on random items such as bottles of wine, computer accessories, and textbooks. But before they bid on a particular item, all students were asked to write down the last two digits of their social insurance numbers.  Then the auction took place and the students made their bids.

Weirdly, the students whose SINs ended in higher numbers (i.e., 97, 93, etc.), than students with lower-ending SINs (23, 16, etc.) ended up making higher bids for miscellaneous items. And not marginally higher—346 percent higher. Just writing those two SIN digits on a piece of paper had, the experimenters surmised, primed them to consider higher real-world numbers when it came time to spend actual money on an item at auction. Ariely and Prelec labeled these numbers anchors, and went on to point out that anchoring happens all the time, with all kinds of purchases. (These findings and plenty of other fascinating ones are detailed in Ariely’s book Predictably Irrational: The Hidden Forces That Shape Our Decisions.)

For instance, if you ate groundhog stew for dinner tonight, prepared from a roadkill specimen you found by happenstance for zero dollars…well. When you found yourself pricing ribeye steak at Safeway a couple of days later you might choke at paying $5.99/lb, deal of the week or not. Your groundhog was free, which tethered your mind to the idea that all meat could be free, and now Safeway’s offerings don’t seem so hot.

But if you recently spent $100 on an organic non-medicated turkey and wasted basted it with sparkling wine for Christmas dinner, now a $19 package of steaks doesn’t seem like such a burn.

Leaving me to reiterate: Where is our bottle of LUCKY COUNTRY???? Ripe and plump with Barossa Valley fruit and considerable tannins, this 2009 Shiraz-Grenache blend is promiscuous with blackberry, chocolate, and earthy notes. Its loose structure makes it a little sloppy going down, but so lush with black fruit that…who cares? It has depth if not definition, and the finish is lingering. 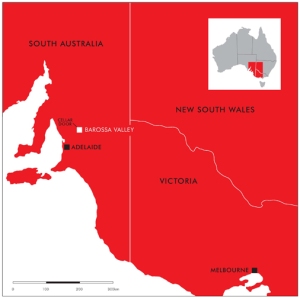 Barossa Valley is one of my favorite wine regions, and in our ‘hood $17.99 is a steal for a decent red from that part of Australia. If there are nicer wines from that area, they tend to cost $4-10+ more—the land of diminishing returns for buyers with budgets like my parents’. And let’s face it, we bought our bunkbed at JYSK, not Pottery Barn. Its price tag can only have ratcheted Dad’s spending anchor so much.

Another plus for LUCKY COUNTRY: You won’t find a critter on the label, marsupial or otherwise. Producer Michael Twelftree doesn’t go in for the mass marketing typical of Aussie wines. His wines are made the old-fashioned way, blended in small batches and minimally filtered. Which is to say, even if my dad had bagged a groundhog the other day, LUCKY COUNTRY wouldn’t have sprung to mind as an accompaniment.

Who needs food, anyway, people? Just get your mitts on some of this awesome and affordable Barossa Valley wine, and drink it as is.

2 thoughts on “LUCKY COUNTRY SHIRAZ-GRENACHE (2009)—You deserve it, and so do my dad and Dan Ariely”