Miss P left this sitting on a chair in the living room this morning. 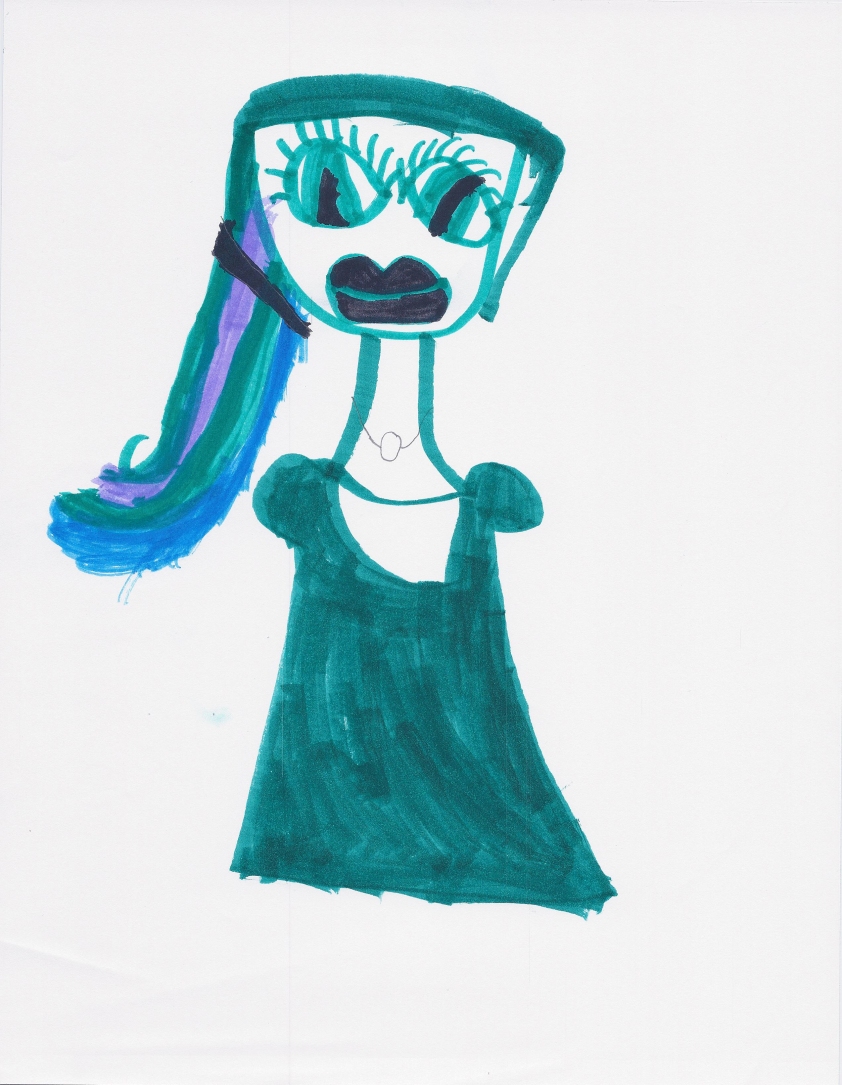 Totally freaky, right? Only two things immediately occurred to me as more frightening:

So what the hell is going on with this picture? For quite a while P has been drawing females with flat heads, giant puckery lips, and grim expressions. Perhaps it’s a developmental phase; one of Dad’s colleagues says his own daughters are drawing flat-headed, big-lipped evil princesses too. Whatever the reason, such images are totally scary and therefore good reason to drink a bottle of wine.

Beckoning from the fridge: VINA ESMERALDA TORRES (2011). Billed by our favorite booze-shop consultant as “the best turkey wine” he’s had in the last 20 years, this Spanish offering retails for $13.99 and consists of Moscatel d’Alexandrie (85%) and Gewurztraminer (15%). I am too drunk to put the little diacritics on those varietals, but you know what I mean. Nor do I care whether this wine pairs with turkey, which gets served maybe once or twice a year at LBHQ and invariably demands the sacrifice of a full bottle of sparkling wine to the cooking process—a sickening travesty compounded by the asparagus that may or may not accompany the cooked bird.

At 11.5% alcohol, VINA ESMERALDA isn’t really up to the brain-cell bludgeoning required to erase scary images, bear-directed trauma at the hands of young children, or terrifying paranormal episodes. It won’t erase shit—you really can drink the whole bottle without incident. And you should. Delicate floral aromas waft from the glass as the wine glass starts to sweat, releasing some spice and tropical fruit as it warms slightly. This is a gentle and refreshing wine with almost a hint of effervescence—nothing obnoxious, though, just a suggestion. Off-dry and easy-drinking, VINA ESMERALDA is virtually impossible to keep in your glass.

Needless to say, our bottle is all gone, and sobriety is around the corner again. And OMFG, my fellow inebriates, this freaky picture is still here, staring at me. 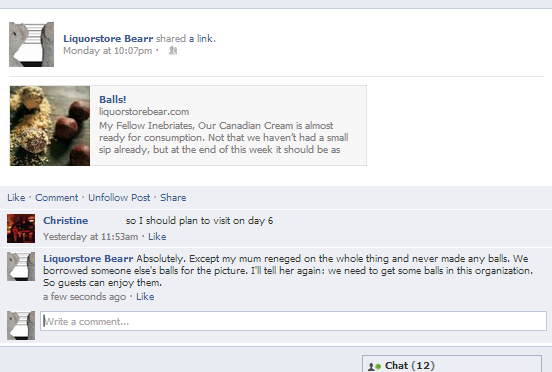 Thus was my mother shamed into making a batch of whisky balls. Creeping on my Facebook page, she saw my tattle to Christine and decided there were worse things she could do with half a cup of Wisers.

Scary and I were both involved, satisfying related motivations of gluttony and hedonism. He accidentally got himself punched in the nose by the pastry blender—luckily not the motorized kind or he’d have had no nose left.

“Is that Irish cream?” Miss V asked as Mum poured the whisky.

By the time she’s six, V will be able to distinguish vodka from gin from 30 paces, unless Child Services gets her first. “Can I smell?” she asked.

“That means I can have two peanut butter cookies instead then.”

No such negotiation had taken place, but who could argue with such lawyerly logic?

This is how we ended up making our whisky balls:

From somewhere Mum produced a melon baller, used it, cursed it, and abandoned it, then hand-rolled a bunch of cute little balls. 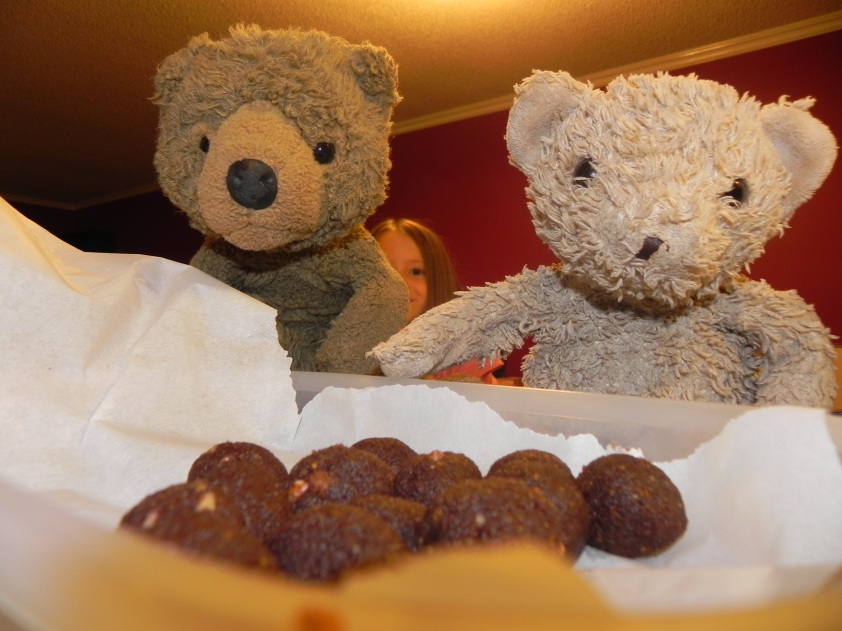 It was immediately apparent we hadn’t used enough Wisers; fresh whisky balls should set your fur on fire their first day, and these were only slightly redolent. Then again, maybe the smell lacked intensity simply because we’d used a cleaner spirit than rum.

Nah…they needed more booze. But it would have been foolish to use more; we need that Wisers for drinking.

Meanwhile the neighborhood has gone apeshit with Christmas decorations. Light shows, sleighs, Santas, Grinches, Scrooges, Bumbles, Rudolphs—you name it and its inflatable likeness is swaying in one of our neighbors’ yards (and lying flaccid on the lawn in the morning, when the kids actually pass by).

Amid all this relatively secular mayhem is a house with a large manger scene out front—Mary and Joseph gazing downward at the infant Jesus, who looks freaking cold in his loincloth. Speaking of Child Services, such nudity may be comfortable in the Middle East, but Langley is at latitude 49.10348. Holy or not, that kid needs some swaddling clothes.

That aside, I felt bad when the family came home from school today and mentioned they’d seen a police officer visiting the owner of that house. We have no idea why, but my first guess would be that someone messed with the nativity display and the owner called the police. Which makes me sad, because obviously, if you’re going to put an overtly religious scene in your yard, it means something to you. And it’s really not cool for someone to vandalize it. 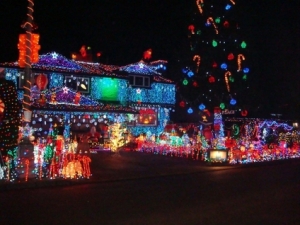 Not our neighbor’s house…but similar

Then again, my guess about the police visit could be totally off-base. Maybe the manger-scene dude called the police about the light show across the street from him, which features so much nutjob ornamentation that the owners must need to rent a storage locker during off-season. A giant Grinch, a family of snowpeople, a hundred candy canes, gingerbread men, all blazing with lights. We can only hope they turn it off before midnight so the neighbors can sleep without having flashbacks of sordid motel overnighters. I could picture a war breaking out between these two neighbors. Maybe Manger Dude asked North-Pole Dude to tone it down a little. Maybe North-Pole Dude ran across the road and put a flashing, sequined baby blanket on the Savior. Who knows? Maybe this has been going on for 20 years. One thing’s for sure—the new LBHQ is situated in interesting territory. 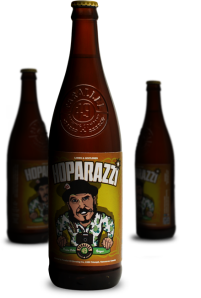 Scary and I can’t get at our balls right now, so we’re staring out the window psychoanalyzing the neighbors. Between us is a HOPARAZZI lager from Parallel 49, a curious choice on the part of my dad, especially with winter so close. (Scary says winter won’t come, ever.) My dad never buys IPA for its own sake. It might ride along in a sampler pack, but generally he doesn’t like a fierce hop shitkicking, and neither does my mum. Dad makes an exception when the hop factor is nuanced and citrusy, as it is in HOPARAZZI. Pale gold and sparkling with fizz, the Pacific West Coast hops’ berserker potential is mitigated by crystal malt, resulting in a well-behaved almost-IPA with an incredibly full mouthfeel and refreshing summery kick. Weighing in at 6% alcohol and 50 IBU, HOPARAZZI isn’t a misnomer; to enjoy it, you have to like hops, although you might not like all hops brewed by all breweries. HOPARAZZI doesn’t kick your ass with hops—it just taunts you a little. Sort of like hanging out with Scary all day when he’s too hungry to make a hostile move.

He is talking apocalypse, though, and with only 16 days remaining, his current theory is volcanism. Yes, my fellow inebriates, Scary figures we’re overdue for a cataclysmic eruption like the one that happened in India 65 million years ago, busting out a quarter-million cubic miles of lava and wiping us out the way he says it did the dinosaurs. The amount of chlorine-bearing compounds unleashed on the ozone layer will turn our little blue marble into a hothouse. We’ll need refreshments. Better stock up on HOPARAZZI.

Our Canadian Cream is almost ready for consumption. Not that we haven’t had a small sip already, but at the end of this week it should be as good as it’s going to get—i.e., ready to chug. I have a few nagging worries, though.

When we made the liqueur, we bought a one-litre carton of whipping cream. Two and a half cups went into the mix, my mum put half a cup or so in some solid-food risotto-like thing, and the rest sat in the fridge with nothing to do. Recycling day came along and, since the unused cream was two days away from expiry, we gave it a sniff. OMG! Holy shit, people! That cream smelled rank. Holy crap, two days early the stuff was horrid. Mum poured it down the drain and rinsed the carton…but it was hard not to look at our giant Canadian Cream jug and think…the same cream’s in there! OMG!

That’s really the reason we got into it early—to make sure it wasn’t off. You wouldn’t want to take a big slug of sour milk products and end up barfing. But it smelled fine. It tasted fine.

Alcohol keeps food from going off.

So what is this amazing preservative power of alcohol all about? How does it work?

Simply put, alcohol is poisonous. At concentrations above 15 percent, bacteria and fungi can’t survive. That having been said, cream-liqueur experts advise against keeping homemade concoctions more than a few weeks, and only then in the fridge. Roger that—we’d better finish this shit now. Review…on the way 😉

To this sage advice, my mum said, “Oh. I guess we’d better not make another batch then. It’ll be enough to get through this lot.”

This is exactly the opposite of what I meant. Of course we should make another batch. Right now.

But instead she said we were going to make whisky balls. 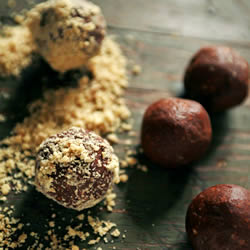 I was immediately suspicious. Another recipe requiring us to cook with booze? OMG! The angels’ share is supposed to be miniscule—the tiny portion that evaporates naturally, not liberal gases spewing into the air from a hot saucepan. Damn it, why do the angels get any of our booze? Aren’t they supposed to be perfect creatures? Not addicts jonesing in distillery cask rooms.

“Relax,” said my mother. “Behave yourself.”

They’re just like rum balls, which you don’t cook either—only they’re made by people who are too ungenerous to buy rum for loveable bears who have repeatedly requested it. Whisky balls are a not-horrible-sounding variation on rum balls. Let’s do this shit.

Here’s what we need:

Life is a compromise at LBHQ, so we’re using graham crumbs. We have to do this without Miss V seeing, or she will demand a bowlful of them (not that she would deign to eat a graham cracker).

Walnuts…the kids will bitch a very great deal if walnuts go into this recipe. But perhaps they shouldn’t be the arbiters of our whisky-ball ingredients.

Corn syrup is one of those things that doesn’t age, and ours is probably older than I am. We’re going to use it anyway.

As for throwing half a cup of Canadian whisky into this recipe…what the hell. The plastic Wiser’s jug is enormous and its somewhat atonal siren song has been relentless lately—better do something with it other than just pound it. Sigh.

Okay, so you really just mix all this stuff up and shape it into balls. (OMG, I’m not even allowed to help with that—what’s the big deal, a little fur?) Then you sequester your balls away for a few days in an airtight container so the flavor can mellow. Five days is about ideal. But it’s hard to be away from your balls for five days. You might find yourself opening the container and sniffing your balls every so often, wondering if they’re ripe.

If your balls are Scottish, Canadian, or Japanese, they’re whisky balls.

If your balls are American or Irish, they’re whiskey balls. As a rule of thumb, if your country has an “e” in the spelling, so does your whisk(e)y and any balls made therefrom.