You think you know your kids (I mean, they live at your house) but then you see them in some random elementary school situation and…WTF?

Take five-year-old Miss V. Her last report card said she “continues to be a solitary child,” adding that V often prefers playing alone but will join others if the group dynamics feel right. Monday morning? V insisted there was no one she wanted to play with. Ever. Tuesday? Wouldn’t leave the playground; she was caught up in a group game. This morning? This morning was a WTF. 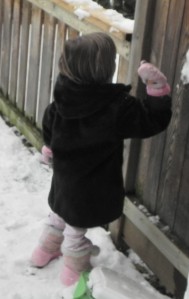 As V entered the schoolyard (wearing a black fur coat from which she won’t be separated despite forecasted highs of 19°C), five boys converged on her, all calling her name. This was delightful; despite having been solitary children themselves, our parents sometimes worry about V’s antisocial streak. “Say hi, V,” Mum encouraged as the boys surrounded her like paparazzi.

But V looked straight ahead and strode through them to her classroom lineup, where she remained, unmoving and expressionless, until the bell rang. WTF?

Yes, Mum did ask her why she hadn’t acknowledged the boys. But apparently V didn’t feel like acknowledging Mum either. She looked positively military, standing in line staring straight ahead, like a Buckingham Palace Guard whose black fur had morphed out of control.*

Then the door opened and she went inside. Mum stood for a couple of minutes after, looking quizzically into the classroom, unable to see her next interactions.

So we’ll have to observe our little black-furred animal in her environment a little more closely and see what gives.

I thought perhaps V’s dust-off would have induced the urge for a drink in our mother, but no luck. Dry weekdays are still in force (and it was 8:30 a.m.). This leaves no choice but to rhapsodize about 1884 RESERVADO MALBEC (2011), a product we shared with company shortly before our mother lost her mind and decided to exhume the women’s temperance movement.

This Argentine red goes for $16.99 at our local booze shop. According to the bottle notes, the grapes are hand-harvested from high-altitude vineyards in the Andean foothills, vinified then aged in fifty/fifty American/French oak for eight months.

As far as liquor store offerings go, this wine is a bit of a sleeper. Parked on the shelf between two other Escorihuela varietals nearly identical labels and prices, you might not notice this one, especially if you’re lurching drunkenly around the store. Escorihuela wines strike me as the straight goods: Old-World techniques brought to the New World with staggering success.

Expectation: a pleasantly fruit-forward bludgeoning. When we did pull the cork, though, the bouquet surprised us. Instead of attacking, the fruit aromas were coy and demure; this Malbec had something to say, but not all at once. The wine exuded black fruit and hints of chocolaty espresso in a way that was somehow disciplined and restrained, like a five-year-old unaccountably marching into class without so much as a glance at her mother. In other words, the aromas amped up our curiosity.

I like decanting suspected fruit bombs so they can off-gas their overexuberance before the first sip, but in this case we had company and I really wanted to get drunk. So into the Reidel glasses it went.

RESERVADO is an inviting rich purple and somewhat leggy. On the palate it’s smooth and dry without being parchingly so. The oak aging imparts a pleasant roundness to the tannins, making for a surprisingly satisfying sipper that’s serious yet thoroughly approachable. There’s a lovely layering of fruit, a sophisticated intensity, and a delectable finish.

“We should probably buy another bottle of 1884 RESERVADO MALBEC and drink it this morning,” I suggested when Mum described V’s behavior. “You know, to make you feel better about being a mother and all.”

*OMG!!! OMG!!! Holy crap, my fellow inebriates, I just read that those eighteen-inch hats worn by the palace guards are called “Bearskins” and are made from real Canadian (!!!!) bears like my friend Blackie Bear because both the British Ministry of Defence and the British Army have FAILED to find a synthetic alternative to bearskin. OMG!!!!!!!!!!!!!!!

I’ve been really caught up with ebay since I decided to bid on a painting yesterday. It’s easy to set up an ebay account, but let’s face it, I’m a bear, so I have no idea how to conduct myself in an auction.

I put my bid in yesterday, and it immediately went up 50 cents. OMG! So I raised my bid by 50 cents. Again! Another 50 cents! And again! Somebody wants the same painting I do, and very badly.

A new Barack Obama & Penelope the Unicorn painting, celebrating this most special season. This unique piece of art also features Baby Jesus in a manger, who is visibly overwhelmed by the unexpected display of reverence. This original painting is certain to become a family heirloom for the lucky bidder; unpacked with reverence each holiday season and displayed in a position of honor. - Artist Dan Lacey

Just then my dad walked by and yanked me off the computer. He told me somebody has an automatic bid in there, and that if I sit with my paw on the bid button, five days before the auction closes, I will just drive up the price unnecessarily, because no matter what I enter, my opponent will automatically raise me 50 cents (up to whatever his/her max is, which I can’t possibly know). Whoa! I had no idea.

Maybe this is what comes of art shopping while sky-high drunk.

But isn’t that what all art connoisseurs do? Don’t they stagger around art galleries whisking champagne glasses off omnipresent waiters’ trays, ready to splurge on objets d’art? Isn’t that what wealthy, cultivated people do?

My mum said yes, it is what they do. However, she added, the terms “wealthy” and “cultivated” have never before turned up in the same sentence as “Liquorstore Bear,” so it’s sort of moot.

I was bored out of my furry head and anxious to boot about whether I would ever possess this painting. So I figured I’d drink a bottle of malbec.

My last tango with an Argentine wine was the Escorihuela 1884 Reservado Syrah, a thoroughly enchanting wine. I’ve been wanting to try S.A.E.V. Eschorihuela’s other varietals, starting with the malbec, but for ages I couldn’t get my mum to buy it. That’s because she once had a bad malbec experience with some Marcus James back before she became middle-aged, and has ever since associated malbec with gouda and feet.

I love exotic aromas and tasting notes, so this just intrigued me all the more, and finally we bought the ESCORIHUELA 1884 RESERVADO MALBEC. Would it smell like feet, I wondered?

Malbec is a pissy varietal, prone to rot and basically the sort of grape that drives vintners to consider setting the whole vineyard on fire. A good malbec is hard-won,  full in the mouth, plummy and purple, bursting with fruit.

We pulled the cork and poured the wine into Reidel stemless glasses. I think we should have decanted it, but we were too lazy. “Breaking Bad” was at a season-end cliffhanger and we wanted to start drinking right away. “Breaking Bad” has some seriously nasty scenes in it, and I wanted to get good and drunk before I saw anybody get waxed with a shotgun.

My dad has this client who often skips the decanting stage too; he just puts his wine in the blender. If I weren’t scared of the Cuisinart I would have done that with this wine, because it benefited by opening up, and probably needed more time than I was willing to give it.

Fresh cherries hit me with the first sniff, an earthy chorus of purple fruit playing back-up. The wine had a parching dryness and fierce tannins  from eight months’ ageing in American and French oak barrels. The mouthfeel was big and concentrated. And the good news: I couldn’t detect either feet or cheese.

At 13.7% I didn’t expect this malbec to be such a creeper, but it got me really loaded—so much so that I almost returned to the computer to make another bid on my painting. Luckily I passed out instead.

The house was feeling downright funereal, and wine seemed in order. One of my visitors had urged an Argentine malbec upon me recently. No objections here, so I hustled my mum out the door to fetch one.

She really took her bloody time. I had to distract myself by reading the news, which filled me with paranoia and dread—especially this item, http://www.sfgate.com/cgi-bin/article.cgi?f=/c/a/2011/11/05/MN3V1LOKC9.DTL, about an asteroid that will barely (bearly) miss us next Tuesday. If only I’d been able to contact my miserable parent to exhort her to get three or four bottles so we could have a properly apocalyptic evening.

Unfortunately restraint ruled the day, and she returned with one wine bottle, and not a malbec (she was not to be, seemingly, commanded by a 7-inch ursine alcoholic) but a syrah, albeit from Argentina as per my instructions. Fair enough.

Scientists tell us very casually that asteroids skirt our atmosphere by mere hundreds of thousands of miles every decade or so. OMG, people. I had no idea. I thought the main threats to my life were young children bent on torture. I thought I might get accidentally beheaded one day maybe, or lose an eye. But here we have massive rocks the size of city blocks careening toward us with a frequency I couldn’t have imagined.

I asked my friend Scarybear if he knew about such things. He told me to chill out and added that I am a “retard.”

So when the wine came back I was relieved. I just had to endure some DTs throughout dinner/bedtime and we were on.

The 1884 RESERVADO syrah (2009) had a real cork, something I hadn’t seen in a while, and of course yet another reminder of my limitations vis a vis dexterity.

Perhaps my favorite aspect of this wine was that it was perfect out of the gate. No need to decant—my tremors bowed instantly to this supple, intensely violet, complex syrah.

As the wine opened up it revealed ripe black fruit, hints of mocha and vanilla, and lovely, balanced tannins. Aged in French and American oak for eight months, this wine lingers on the tongue with an unforgettable intensity.

By the time we finished this bottle I didn’t even care about that stupid asteroid. But I’m still preoccupied with my thumblessness. Find me an invention so I can open bottles, people, and I’ll be yours forever.