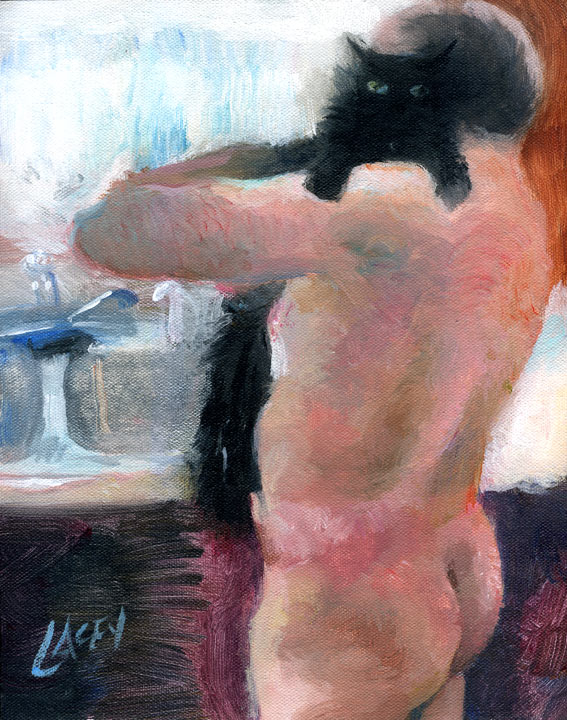 Today this Dan Lacey painting’s ebay price exceeded the funds in my PayPal account, at which point my dad said, “Why that one?”

I said I like the way the cat is staring directly out from the painting, the way cats do—sort of accusingly. I wouldn’t mind having a cat like that, except the whole household would be wheezing with allergies.

Despite my dad’s obvious discomfort about having a nude self-portrait of the artist with his cat on our wall, he’s made some progress toward appreciating Dan Lacey. Out of the blue one day he said something backhanded, like “He actually captures a good likeness,” or “I actually like some of Dan Lacey’s paintings.” He always qualifies with the word “actually,” as if to say the majority of Lacey art is not his thing.

Take this painting of Mitt Romney, the bidding on which has climbed to $76.00 following a plug by Jimmy Fallon.

Dan Lacey—Mitt Romney and Jimmy Fallon Engaged In A Game Of Nude Beer Pong: The Painting

Even though Mitt Romney’s not Canada’s problem, I like to keep an eye on him, so this painting could grow on me—but not my dad! My dad says it’s all wrong.

Luckily for him, I have less than $5 in my PayPal account.

My dad recoiled from this one too.

Dan Lacey—Mitt Romney in the Nude

Again it’s just my dad’s luck I have so little money—the bidding’s at $122 and climbing. The eyes are creepy, as though Romney’s considering who the biggest possible whackjob might be for a running mate. The way he stares out like that cat, he’s almost asking, Are you crazy enough? Because I need your vote.

My dad may be unwilling to invest in my art collection, but he did spring for a few onesies in the beer aisle a while back, including the almost unmentionable FRÜLI and—fortunately—several other better choices. Slightly on the weird side but not unacceptably so, PHILLIPS LONGBOAT CHOCOLATE PORTER caught his attention. In fact, he’d been looking for it since he tasted it (without me) on tap at a restaurant.

Chocolate porters are springing up everywhere these days and even being drunk by people who don’t usually like beer. Much the way people who avoid James Bond’s idea of a martini will down a chocolate one, those who dislike hoppy beers are sometimes amenable to rich, chocolatey beers that almost bridge the gap between flavored mixed drinks and straight beer. Almost.

If you are a fan of hops and malt, tastes like chocolate and espresso can be unwelcome. As a beer fan, you’re part of a choir that doesn’t need preaching to—you enjoy the standard spectrum of beer flavors and, while you might also enjoy a morning latte, you don’t necessarily feel compelled to combine the two drinks. I always thought my parents fell into this camp, but lately my dad’s been getting more open-minded.

We split the 650mL bottle between two Reidel glasses (egregious but true: I don’t ever get my own glass; I have to sip from one or both of my parents’). Lovely dark cola brown with an opaque white head, LONGBOAT CHOCOLATE PORTER makes no bones about being chocolatey—dark chocolate notes predominate overwhelmingly on both the nose and the palate. The mouthfeel is rich and creamy without being cloying and ends with just a hint of bitterness.

I see why my dad sought LONGBOAT CHOCOLATE PORTER out after trying it on tap. It’s nicely balanced and offers some unusual but still harmonious flavors. My mum (because she is boring) wasn’t taken with it, which was great, because I found myself with my own glass after she abandoned it. This is how things should be at LBHQ—me and my dad sitting around knocking back beers, heedless of his wife’s criticisms about chocolate having no place in beer. Yeah! I got my own glass and it was awesome.

LONGBOAT CHOCOLATE PORTER is only 5.2% alcohol, but when a small bear consumes 300mL of it, that small bear passes out. I got annihilated. And that’s why I ended up looking at paintings of Mitt Romney this morning—I thought it would help me throw up.

But as is usual with Dan Lacey’s art, his mastery overcomes the subject matter. Rather than yakking all over the floor, I found myself online trying to acquire another painting. Sadly for me, these ones are out of my financial reach, people, so you might have to get on ebay yourselves if you want any of them.