You think you know your kids (I mean, they live at your house) but then you see them in some random elementary school situation and…WTF?

Take five-year-old Miss V. Her last report card said she “continues to be a solitary child,” adding that V often prefers playing alone but will join others if the group dynamics feel right. Monday morning? V insisted there was no one she wanted to play with. Ever. Tuesday? Wouldn’t leave the playground; she was caught up in a group game. This morning? This morning was a WTF.

As V entered the schoolyard (wearing a black fur coat from which she won’t be separated despite forecasted highs of 19°C), five boys converged on her, all calling her name. This was delightful; despite having been solitary children themselves, our parents sometimes worry about V’s antisocial streak. “Say hi, V,” Mum encouraged as the boys surrounded her like paparazzi.

But V looked straight ahead and strode through them to her classroom lineup, where she remained, unmoving and expressionless, until the bell rang. WTF?

Yes, Mum did ask her why she hadn’t acknowledged the boys. But apparently V didn’t feel like acknowledging Mum either. She looked positively military, standing in line staring straight ahead, like a Buckingham Palace Guard whose black fur had morphed out of control.*

Then the door opened and she went inside. Mum stood for a couple of minutes after, looking quizzically into the classroom, unable to see her next interactions.

So we’ll have to observe our little black-furred animal in her environment a little more closely and see what gives.

I thought perhaps V’s dust-off would have induced the urge for a drink in our mother, but no luck. Dry weekdays are still in force (and it was 8:30 a.m.). This leaves no choice but to rhapsodize about 1884 RESERVADO MALBEC (2011), a product we shared with company shortly before our mother lost her mind and decided to exhume the women’s temperance movement.

This Argentine red goes for $16.99 at our local booze shop. According to the bottle notes, the grapes are hand-harvested from high-altitude vineyards in the Andean foothills, vinified then aged in fifty/fifty American/French oak for eight months.

As far as liquor store offerings go, this wine is a bit of a sleeper. Parked on the shelf between two other Escorihuela varietals nearly identical labels and prices, you might not notice this one, especially if you’re lurching drunkenly around the store. Escorihuela wines strike me as the straight goods: Old-World techniques brought to the New World with staggering success.

Expectation: a pleasantly fruit-forward bludgeoning. When we did pull the cork, though, the bouquet surprised us. Instead of attacking, the fruit aromas were coy and demure; this Malbec had something to say, but not all at once. The wine exuded black fruit and hints of chocolaty espresso in a way that was somehow disciplined and restrained, like a five-year-old unaccountably marching into class without so much as a glance at her mother. In other words, the aromas amped up our curiosity.

I like decanting suspected fruit bombs so they can off-gas their overexuberance before the first sip, but in this case we had company and I really wanted to get drunk. So into the Reidel glasses it went.

RESERVADO is an inviting rich purple and somewhat leggy. On the palate it’s smooth and dry without being parchingly so. The oak aging imparts a pleasant roundness to the tannins, making for a surprisingly satisfying sipper that’s serious yet thoroughly approachable. There’s a lovely layering of fruit, a sophisticated intensity, and a delectable finish.

“We should probably buy another bottle of 1884 RESERVADO MALBEC and drink it this morning,” I suggested when Mum described V’s behavior. “You know, to make you feel better about being a mother and all.”

*OMG!!! OMG!!! Holy crap, my fellow inebriates, I just read that those eighteen-inch hats worn by the palace guards are called “Bearskins” and are made from real Canadian (!!!!) bears like my friend Blackie Bear because both the British Ministry of Defence and the British Army have FAILED to find a synthetic alternative to bearskin. OMG!!!!!!!!!!!!!!! 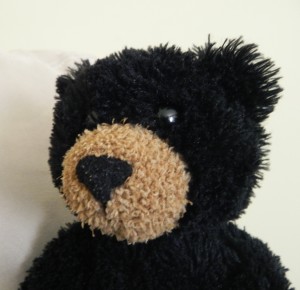