This week the car decided it no longer wanted my mother driving it. Perhaps it got fed up with her sighs about its eight-cylinder profligacy. Maybe it remembered the sweltering day when she parked it under trees that drooled sap over its windshield. Or finally it just exercised a judgment call on her lack of coolness.

How did the BMW manage to bar my mother—but not my father—from driving it?

Ingeniously. The car has automatic seats, adjustable along half a dozen parameters and then—since no two drivers’ asses are exactly alike—recordable into memory.

Jiggle the levers up, down, and around until not just the seat but the mirrors and steering column are positioned exactly as you like them, then hit the “M” button followed by your number (1, 2, or 3). Since Dad’s the primary driver, he took number 1. Mum took number 2, and my friend Scarybear claims he has the number 3 setting “for midnight drives.” Voilá! That crazy car remembers your personal settings, so if somebody else changes them, all you have to do is press your button and your ass is happy again.

Midnight drives indeed. If you ever see something like this driving an oncoming vehicle, hand over your keys.

If the BMW itself is smug about its wonderful car seats, Dad is just grateful. Only the BMW provides the support he needs when his lower back hurts. He’ll even go for a long drive just to assuage back pain. Just him and the clever red car.

And even though most of the BMW’s features make Mum roll her eyes, she secretly loves the automatic seats—or at least she did until this week. That’s when the car got fed up with her bullshit comments about preferring “environmentally friendly” vehicles and froze Dad’s seat settings in place.

All very well if Mum were 5’10” like Dad, but she’s practically a Hobbit. If the car could actually achieve Scarybear-appropriate settings, those would be closer to my Mum’s number 2 than Dad’s number 1. Even if the car didn’t maliciously shut her out of its seat-adjusting wonderfulness, it probably just got fatigued going from one extreme to the other and back all the time.

Some men would be happy having the car all to themselves. For Dad it means driving the kids everywhere—swimming lessons, birthday parties, you name it. If we run out of milk, he has to go get it. The same goes for beer.

So what did he get? 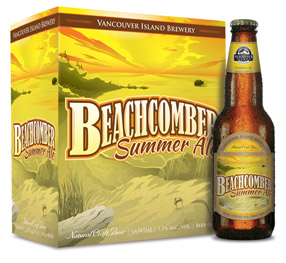 Actually, Mum picked beer up before the car decided to take its revenge on her. BEACHCOMBER SUMMER ALE from Vancouver Island Brewery siren-called her from the liquor-store shelf on her last visit, and the car seemed okay about allowing it in the trunk. The car did not, however, point out that she’d accidentally bought a weissbeer; it isn’t quite smart enough to know she wouldn’t have intentionally picked a brew with fruity tasting notes. That, or it just thought “fuck you” and off they went.

For what it is, BEACHCOMBER SUMMER ALE does it well. Cloudy gold and hop-redolent, this unfiltered beer comes across clean and fizzy yet tropical with grapefruit predominating over a basic cereal foundation. It’s crisp and refreshing but not so light that those hops won’t rough you up a little. The fruit doesn’t stray into rotting-orchard territory, but all the same, if you don’t get the fruit-and-beer concept, you probably won’t be too excited about BEACHCOMBER.

I was, of course, excited. Whenever beer is opened, I get excited. And Mum should be excited too, because her next revelation was this, leveled at Dad:

“Ha! Now you are always the designated driver.”