Even with full-on exploding-out-both-ends stomach flu, the kids don’t want to sleep. They want endless games of Uno, Sequence, Sorry…hours of Power Rangers Samurai episodes (accompanied by a parent and some bears, of course)…as many books as can be read between vomiting spells…but not bed. Not at all.

A hundred years ago, everybody’s grandma would have given those kids some Scotch. Or in our case, Malibu, because that’s all we have. But in their predictably boring way, our parents are toeing the line when it comes to alcohol and children, which means they’re passing up twin benefits—health and peace.

Sure, alcohol depresses the immune system. None of my hobo friends is going to be on the cover of Men’s Health anytime soon. But a small sip of wine would confer some heart protection and lower the odds of developing Alzheimer’s disease and other age-related dementia (“which we’re not concerned about just yet for the kids,” my mum said).

But what about my parents? Just a couple of weeks ago my dad locked his keys in the trunk of the car. My mum sent Miss V off to school without her lunchbox. And somebody consistently forgets to flush the toilet…a somebody under 7 years old. Surely Miss P could use red wine’s memory-boosting resveratrol?

“You are really reaching,” said my dad. “This is a good opportunity for you to dry out.”

But why? The bears aren’t affected by the LBHQ stomach bug. We bears have nasty-ass enzymes that allow our digestive systems to process anything. There’s nothing my mother could cook that would kill us, and that’s saying something.

It’s really hard to watch Power Rangers Samurai while sober. It is a totally stupid show. IMDB rates it 4.8/10, which is the lowest rating I’ve ever seen. If we are going to sit on the couch letting it melt our brains, we must have some resveratrol. 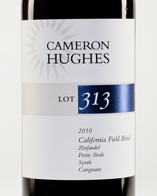 A good source would be CAMERON HUGHES LOT 313 CALIFORNIA FIELD BLEND (2010), a captivating mixture of Zinfandel (71%), Petite Sirah (10%), Syrah (10%), and Carignane (9%). We sampled it about two weeks ago while watching Fringe, which made the show less scary and less comprehensible. As with lots of J.J. Abrams programs, if you miss a couple of episodes you’re really f*cked, especially if you don’t have enough resveratrol. At 14.5% alcohol, the wine didn’t do J.J. Abrams any favors, but who cares? This is the last season for Fringe, he is probably totally bored with it, and he will probably end it in a totally unsatisfactory way.

Cameron Hughes is not a vineyard or a vintner. Describing itself as an “international négociant,” the company sources and finances small lots of high-quality wine from the world’s best regions. By partnering with high-end producers it creates 100 unique wines per year and sells them at a fraction of the price of bottles bearing the source wineries’ official labels.

If this seems crafty, consider the term “Field Blend.” A field blend is produced from a bunch of different varietals all grown in the same field and harvested at the same time (but since they don’t reach maturity at the same time, a best-guess average picking time is chosen and the vintner hopes it works out). This is kind of like trying to guess when everyone in the house will stop barfing so you can disinfect the sheets, and apparently very few winemakers use this old-school method any longer because of the risk that many of the harvested grapes won’t be optimal. But with Zinfandel comprising more than two-thirds of CAMERON HUGHES LOT 313, the method is somewhat less risky than with a more evenly distributed blend.

The hue is deep, ripe cherry. Wood smoke and lush fruit exude from the glass along with spice and berries. Oak aging provides tannic weight; the wine parches just slightly past mid-palate after enveloping the tongue with a burst of berry and smoky, rich, balanced Zin fruit. The finish lingers and lingers.

CAMERON HUGHES LOT 313 is one of those fabulously concentrated wines with enough structure to make it a conversation piece. Given CH’s approach to wine production, it would probably compete with a wine twice its $20 pricetag. Moreover, this particular blend will never exist again.

All of which recommends it highly as a post-flu restorative, if not a kiddie sedative. Of course I proposed it to the family, but my dad said he was still grossed out by toast. I said, “Oh, well, I’ll have some CAMERON HUGHES without you.”

My mum said, “If you mention wine one more time, I’m going to read you The Velveteen Rabbit and substitute “bear” for every occurrence of “rabbit.”