Tonight is Meet-the-Teacher evening and my parents’ latest killjoy rationale for staying sober in the early afternoon. (Others include “working” and “taking the kids to the park.”)

And then there’s the overriding concession to social mores: “It’s early, buddy.”

Which got me thinking: How early is too early? Do you have to be middle-aged, uptight, and live in Langley to eschew alcohol before 5 p.m.? Or does everybody operate that way except yours truly and his hobo cohort? 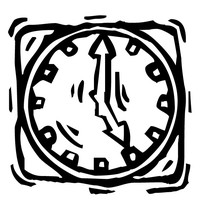 Because, seriously, if the clock says 4:59, my mother won’t crack a beer. If it’s not 5:00, it’s not happening—unless it’s Christmas or her birthday or Thanksgiving or Canada Day or we have company or somebody else does it first. Since the most obvious somebody doesn’t have thumbs to open bottles, and most days aren’t celebratory (I pitched Rosh Hashanah but she didn’t bite), the clock tyrannizes me with its slow ticking toward happy hour.

Apparently all societies have proscriptions on time of day for drinking. (Holy crap, why?) Jittering away until dinner is a cross-cultural norm, my fellow inebriates. A study of 14 countries shows that drinking is much more prevalent after 5 p.m. and on weekends. Drinking that occurs outside of these socially determined times correlates strongly with alcohol-related social problems. Researchers concluded that problem drinkers were most likely to drink at these times. OMG!

The study strikes a note because I would be more likely to drink at these times. If I had my druthers, by 5 o’clock I wouldn’t be drinking anything at all; I’d be heaving away somewhere behind the couch.

But I’d never have sampled SANTA ANA CASA DE CAMPO TORRONTES (2010). It would have been drunk by my parents (“peacefully”) during my passed-out time. 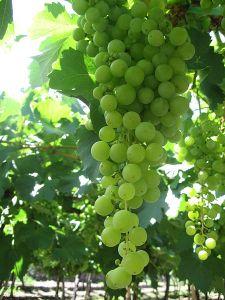 Torrontes grapes look a lot like the green grapes you find at the supermarket. I have no idea whether they’re the same, nor has it occurred to me to eat them, but if they are, the kids’ lunchbags often contain the ingredients for a fresh, aromatic white wine with moderate acidity. Not a waste, as the kids do need to eat, but it’s good to know Torrontes grapes abound throughout Europe and the Americas. Three variants exist, the most common being Torrontes Riojano, the most likely ingredient in SANTA ANA CASA DE CAMPO.

Torrontes doesn’t age well and is best consumed within a year of its vintage. If you have a bottle from 2010 you should drink it right now, even if it’s not 5 o’clock yet.

I expected a mellow, caressing Torrontes-style fruitiness to wash over me, so the zestiness of SANTA ANA CASA DE CAMPO was bracing. Pale lemon yellow, it exudes fragrant citrus and floral notes, perhaps some jasmine tea. One whiff and you know this wine isn’t mellow; it’s zippy, zingy, and whatever other Z words you can think of. The aromas translate logically from nose to palate—bright, well-balanced chords delivered with light-to-moderate mouthfeel and a finish that doesn’t overstay its welcome. Certainly a yummy wine, but not as generous and lingering as the varietal can be.

The bottle recommends pairing SANTA ANA CASA DE CAMPO with seafood or spicy cuisine—i.e., dinner. But this seems too late in the day to enjoy such a crisp Torrontes. Better to pair it with a spicy breakfast omelet.

Better still, just wake up and open the bottle.

(Holy crap, where is the family? I thought it was Meet-the-Teacher evening. It’s night! There are stars out! Do you think they’ve made a detour to the liquor store?)