Every week your ASTROLIQUOR profile (What the stars say you should drink!) provides facetious, trying-to-be-funny recommendations on saucing up your social life with that magical elixir, alcohol.

A while ago I added the tags “poor judgment,” “specious advice,” “irresponsible behavior,” and “tasteless” to the weekly horoscope. Not that this was necessary—I know my readers are smart. They wouldn’t really take advice from a bear whose furry head contains only two brain cells, both of which are semi-permanently fried.

But every once in a while I get a reminder that there are people out there who do behave irresponsibly around alcohol. They surround themselves with like-minded friends who drink to oblivion with the express purpose of surrendering any responsibility or intentional behavior. These people sometimes do bad shit, and sometimes bad shit happens to them.

I was very upset and disturbed to hear that a fellow blogger’s daughter, upon attending her first Burning Man event, was dosed with hallucinogens, raped, and dumped on a side street.

She’d accepted a glass of “water” at a camp called “Want It,” only to wake up later in the med tent with an IV in her arm and a patchy recollection of the attack.

Although she can identify her attacker, he can’t be charged. There are no rape kits and no forensic nurses out on the Playa.

My heart goes out Miss R and her daughter. Her daughter did nothing wrong. And even if her daughter had overindulged, as the Burning Man rangers initially suspected, she still should have remained safe from sexual predators. That was her right.

I could post dozens of messages warning women (and men for that matter) not to drink excessively, not to leave a drink unattended at the bar, and not to leave a bar with someone under the influence. Messages like this: 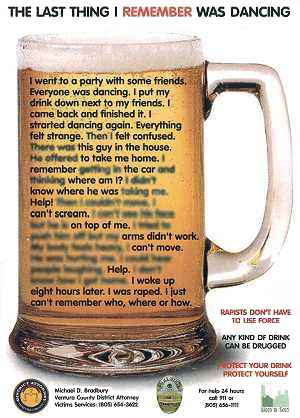 No one should have to be told this stuff.

At best such messages recognize the pragmatic reality that, despite the best ideals upheld by majority non-predators, women (and men) still cannot allow themselves the vulnerability attendant with inebriation. Not if they wish to feel safe.

At worst, these messages reinforce the notion that if you compromise your judgment with a few drinks, whatever happens is your fault. And as a society we haven’t done a good enough job getting across that it’s not.

7 thoughts on “A dry day at LBHQ—by choice”