This morning, in a moment of disloyalty, I tried to stow away in Christine’s fabulous canvas bag. Yes, Christine had arrived the night before bearing wheat ale, red wine, and—treasure of treasures—Glenmorangie 18. 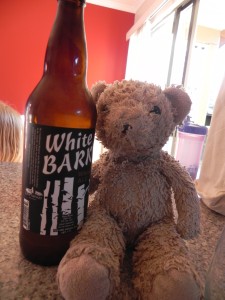 We kicked things off with the wheat ale. WHITE BARK is a traditional Belgian-style ale brewed by BC’s Driftwood Brewery. Intended to be cloudy, WHITE BARK pours a hazy golden hue with a fine off-white foam that settles down quickly. It announces itself to the olfactory centre with a wheat-borne flood of coriander, clove, and citrus notes—in some aspects (perhaps I have gin on the brain) channeling Bombay Sapphire down to the very bottle, which sports a similar vertical row of tasting-note glyphs.

As we inhaled WHITE BARK we noted a strong yeasty backbone, which played out on the palate along with Belgian-style fruitiness and malt. Refreshing at ice-cold temperature, the ale became slightly cloying as it warmed and the flavors cut loose. The carbonation was prickly and pointy, urging WHITE BARK toward mainstream Pop Rocks quaffability even as the intriguing fruit notes insisted that no, it was not in any sense an ordinary beer.

And it wasn’t. But you have to really like wheat beer to appreciate an ale like WHITE BARK. It’s crisp and dry but still belongs unmistakably to the fruity-yeasty-wheaty camp. There’s a lot going on in it—sort of like a party that splits off into several factions, one of which decides to chuck a seven-foot cactus off the roof into the pool while the rest continue their obliviously sedate conversations. Which is to say I liked it, although I might not buy it again immediately. 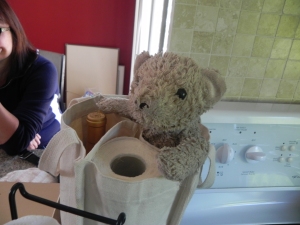 And that was when I noticed, one of the compartments contained not booze but paper towels. Paper towels!!

Finishing the WHITE BARK bottle left a compartment empty in Christine’s canvas bag. (We didn’t get to the red wine, although some other, magnificent booze was shared.) When I peeled myself off the counter this morning, the first thing I saw was that empty space—just roomy enough for a little bear. So I climbed in.

And then I started to worry. My initial thought had been: Every time Christine comes over, she brings tons of booze! But my worry was this: If Christine has tons of booze, it’s because she saves it, and that means she doesn’t drink it very often. OMG!!!

At that moment my mum found me and helped me out of the bag. She said I had a blog to write, and some cheap crap to drink later—hooch so cheap we can drink it every day.

I’m right where I belong. (But Christine is welcome to come and live with us.)