OMG, why? How could the Russian government be so draconian? 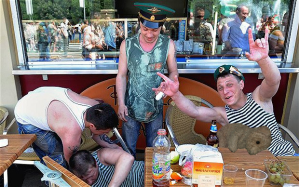 Revelers back home in Russia. That must be a cousin of mine.

According to Ilia Djous, spokesman for Deputy PM Dmitri Kozak, “Olympic values are not compatible with alcohol.” Which may well be true—according to statistics, 500,000 Russians die annually because of alcohol abuse, which isn’t very morale-boosting.

More to the point—Russian athletes, renowned for alcohol-fueled revels at the Vancouver 2010 Olympics, got their asses handed to them that year, skulking home with only 14 of an expected 50 medals.

Crime and punishment! Thanks to athletes’ poor 2010 performance, there will be no booze, even for competitors whose sporting events are safely concluded. Even medal-winning athletes will have to wait till they get home for a celebratory toast.

As for vodka producers…well, we will have to bolster them by drinking more vodka.

4 thoughts on “No vodka for Russian athletes? Say it ain’t so…”