Somebody mailed a human foot to the Conservative Party’s Ottawa HQ yesterday, causing police to declare a Hazmat situation while investigators pored over the Canada Post sorting plant where all packages go before final delivery.

Weirdly, a maggoty human torso had just been discovered in a suitcase in Montreal. Who knows where the head and remaining limbs are destined… I sure wouldn’t want to be a mail sorter this week.

Tory MP Brad Trost, a hardcore pro-lifer who apparently thinks Stephen Harper is too conservative and longs to reopen the abortion debate in Canada, first learned about the foot on TV. “It’s just awful,” said Trost, describing it as “someone’s sick idea.”

Newsflash, Brad: A picture or a story about a severed foot is a sick idea. An actual severed foot goes beyond ideation. Dude, when somebody mails you a body part, it’s either:

Wow! A lot can happen while you’re out swinging on swings, visiting Tim Horton’s, and watching dogs get haircuts at the pet store. The police just intercepted a package containing a severed HAND at the Ottawa Postal Terminal. They’ve connected the hand and foot with the torso in Montreal, plus they have a suspect. In all likelihood the gruesome mailings are a mob-style message related to the Charbonneau Commission investigating organized crime in the construction industry.

Although police have expressed doubt that any more body parts will show up in the mail, if I were an employee of Canada Post or the Harper government I would definitely be bringing a flask to work. Maybe even phoning in drunk.

With a six-pack of GRANVILLE ISLAND CYPRESS HONEY LAGER I could just manage it, although my friends weighing more than a pound might want to consider a full case. Amber-yellow with a quickly receding beige head, this lager promises honey. Instead bakery leftovers and cloying malt waft from the glass. If you detect honey then you have a finer nose than I and/or the power of suggestion is strong with you. If this latter characteristic fits, you might not wish to drink CYPRESS HONEY LAGER while reading about detached body parts crawling with maggots—you wouldn’t want to cement that association. 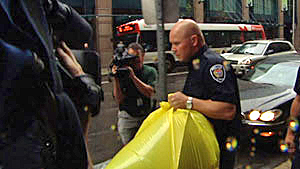 Honey, when added to a lager, often mitigates the tinny lightness of that brewing style and lends some depth. But one sip of CYPRESS HONEY LAGER confirms what the nose suspected: precious little honey. Sweetness, yes, but of a juvenile, corn-syrup stripe unable to elevate this lager from a thin, watery and even sour taste experience. This would be an excellent keg beer. If, say, you were moving from a house with a mean landlord and wanted to host one last housewrecker party, CYPRESS HONEY LAGER would be a good choice. Its promise of delicious honey is exactly like a parsimonious landlord’s commitment to fix the toilet.

If you don’t have enough friends to warrant a kegger, but you do like pounding beers while watching morbid CBC news stories, this lager would do for that too.