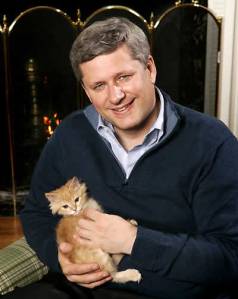 Of course we don’t call it “bail-out money” in Canada. We call it “liquidity support,” and it amounted to $3,400 for every man, woman, and child in Canada. Whereas 436 U.S. banks went under during the recession, liquidity support kept all of Canada’s lending institutions out of the shit, supplying—at times—more than 150% of those institutions’ worth.

Getting to the bottom of these numbers will take more than the efforts of a drunken bear.

Despite applications for full disclosure under the Freedom of Information Act, the Bank of Canada refuses to release its accounting. Details of today’s report came from the U.S. Federal Reserve, which publicly released data on a U.S. program into which Canadian banks had dipped (in addition to taking their Canadian handout)—Canadian banks that ultimately posted combined profits of $27 billion when all was said and done.

Meanwhile, little knowing how far underwater Canadian banks had sunk, we all continued to pay usurious credit card interest, got bilked on monthly “service” charges at institutions where the so-called services had long since been fully automated, saw the removal of services in return for said service charges, endured who knows how many dinner-time insurance sales calls, and—for the privilege of taking out a mortgage with one of these stable lenders—ponied up $20K in insurance money to insure not our risk but the bank’s. Oh yeah.

If the kids asked what a “bank” was we’d say it was a place to save money—a place where your money is safer than it would be under the mattress. Canadians often crow about the safety of their banking, but as it turns out, we pay dearly for that security.

So to you, Stephen Harper, with your selectively socialist impulse, bite me. I want my $3,400 back. I have a bar to stock, and you’ll be getting my shopping list. 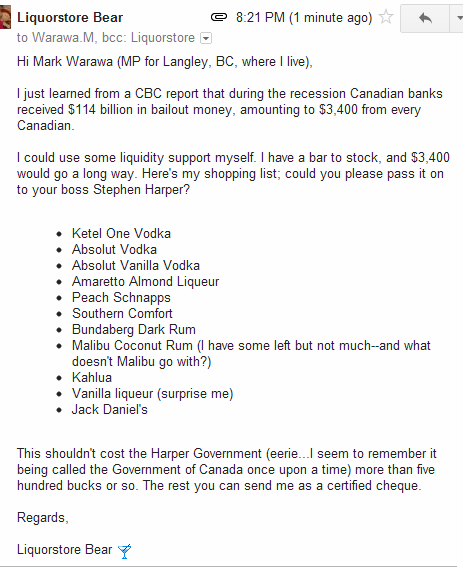 Lucky me, I have a conservative MP to whom I can address my concerns.