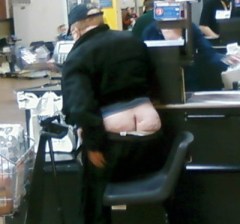 My mum swears she saw ass crack in Walmart today as she was leaving with the stroller, the kids and the groceries. Right before that she’d witnessed giant, pendulous bosoms lolling out of a dirty negligee over in the frozen-foods aisle, a week before darkest winter.

I believe my mother because she’s too humorless to invent an elderly man in a death-metal leather jacket yanking up his ill-fitting jeans to return to proper privacy four inches of rectal spectacle. She said this parting shot from Walmart had kind of made her forget about the half-naked woman buying ice cream.

I love fashion diversity, but even more, I love knowing that the People of Walmart are a real phenomenon, not something staged by Walmart haters or, more deviously, by Walmart itself. No, these people actually flock to Walmart every day wearing feathers and leather and tats and animal prints—without coaching or prompting—spilling out of their (perhaps carefully chosen) duds. What a marvelous, organic culture Walmart has spawned.

My mum predicted I would say it called for a toast and unfortunately kiboshed a bottle of wine, lording her opposable thumbs over me. Which leaves me to review a very unworthy beer available at grocery stores everywhere, even in Canada and probably at Walmart.

Calling O’DOUL’S a beer is charity to say the least. O’DOUL’S is an alcohol-free abomination, a <0.5% pretender. Faintly metallic and over-sweet, this wanna-be brew pours light amber-yellow, then rests uneventfully in the glass, wafting chemical aromas and mocking you with its lack of alcohol.

You guys know I find something to like about pretty much everything, provided it has alcohol, so it’s really not fair to beat up O’DOUL’S too much. If you’re pregnant or driving or drying out, maybe it’s a good solution. But it’s hard to tolerate something that taunts you with beer-like qualities but simply isn’t a proper beer. There are a million other fizzy beverages I’d have before I’d crack another O’DOUL’S.

So on the “crack” note, and for consistency’s sake, here’s my recommendation: Use it for enemas.