Yesterday Ontario Premier Doug Ford declared the Easter Bunny an essential worker, assuring children there would still be chocolates on Easter morning. This followed similar assurances by New Zealand’s Prime Minister Jacinda Ardern about both the Easter Bunny and the Tooth Fairy, and was quickly seconded by the premiers of Winnipeg and Quebec.

The Tooth Fairy is, of course, creepy.

But in the case of the Easter Bunny—especially when delivering booze-filled eggs (okay, that’s never happened in our house but I keep hoping for it)—this type of news is exactly what kids need to hear.

Okay, maybe not our kids. Now 12 and 14 years old respectively, their message to the Easter Bunny is: “Just put all the stuff on the kitchen table.” But for all the innocent, not-yet-cynical little kids who whose pandemic-related anxiety could only be surpassed by the threat that the Easter Bunny might not show up to hide eggs throughout their houses, it’s good to know our provincial governments are recognizing the necessity of magic and joy.

Over to you, Justin Trudeau. Can we expect a Canada-wide declaration this morning?

I’m all for speaking moistly during non-pandemic times. Being as absorbent as a bar rag, I’m often moist (well, damp). But our prime minister urging everyone not to speak moistly this morning? That was a treat.

Reactions on Twitter were immediate and largely positive. The moment was downright humanizing. But still, we had to make sense of it. Here’s our attempt.

I’d be lying if I told you I tuned in regularly to Question Period in the House of Commons, but I wish I had yesterday. Apparently all hell broke loose after Environment Minister Peter Kent asked why NDP environment critic Megan Leslie hadn’t attended last week’s climate change summit in South Africa, knowing full well she hadn’t been allowed to. Liberal MP Justin Trudeau lost it and uttered a big first for the House: “Oh, you piece of shit.”

To crusty old parliamentarians this marks a nadir for the House and the gentle art of debate. Trudeau immediately apologized for the outburst, and asked that it be stricken from the record, but it had already borne wings on countless tweets.

It’s not necessarily a bad thing.

Commons proceedings can get pretty dry, and I suspect the demographic watching them is a little older than the generation peppering its conversations with the term “piece of shit.” Asked what his dad Pierre would have thought of his outburst, Justin said, “He would say that he was disappointed that I had to stoop to language that was unparliamentary, but I know that he would have probably been pleased that I was sticking up for someone else.”

This fly thinks a "piece of shit" is a good thing.

For me the phrase “piece of shit” is an indispensable descriptor, versatile enough to encompass things that don’t work, things that won’t work, and things that are totally corrupt. Its pedigree isn’t that old—the earliest film script it turns up in is 1983’s SCARFACE (“Manolo, shoot that piece of shit!”), after which it appears regularly: 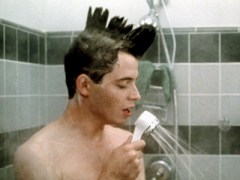 FULL METAL JACKET (1987)—“Are you quitting on me? Well, are you? Then quit, you slimy fucking walrus-looking piece of shit!”

THE BIG LEBOWSKI (1998)—“Life does not start and stop at your convenience, you miserable piece of shit.”

OFFICE SPACE (1999)—“One of these days I’m just going to kick this piece of shit out the window!”

SNATCH (2000)—“What we’re saying is that six-pound piece of shit stuck in your pants would do more damage if you fed it to him.”

Sylvester Stallone particularly likes the epithet, which pops up in CLIFFHANGER, DAYLIGHT and DEMOLITION MAN.

Needless to say, this list isn’t comprehensive. LEGEND OF THE SEEKER, DUE DATE, TWELVE MONKEYS, LEON, DEMOLITION MAN, FIGHT CLUB, APOLLO 13, THE SHAWSHANK REDEMPTION, WAITING, GOODFELLAS, THE OTHER GUYS, THE MATRIX, SEVEN, JACKIE BROWN, THE GODFATHER III and probably dozens of others all feature the phrase “piece of shit.” Feel free to correct me, but I couldn’t find it pre-1983.

Which makes “piece of shit” a quintessential term for the kids who were weaned on FERRIS BUELLER. For ‘80s and 90s high school grads and beyond, “piece of shit” has been a piece of life. It makes abundant sense, it sums up a situation or a person in three poignant words, and it’s often the most apt comment possible. And for Justin Trudeau to call Peter Kent a piece of shit when he was being just that is…admirable.

Let’s toast with a Gin & Fresca—gin because, well, gin is awesome, and Fresca because it contains the magical chemical aspartame, which hit the market in the 1980s just like the term “piece of shit.” Ahhhh!