My dad is considering switching industries, which means he’s been paying some overdue attention to his business speak. It occurred to him this week that he doesn’t have an “elevator pitch.” If you don’t know what an elevator pitch* is, read on, my fellow inebriates, because everyone should have one. As I said tauntingly to my dad, even I have one:

He says this is actually a haiku, but whatever, people. My dad doesn’t have an elevator pitch at all. So today I learned how to write a proper one, because I love my dad, plus I want him to bring even more liquor money home, and a good elevator pitch will help. Herewith, the five steps to writing a good elevator pitch—in this case applied to a bottle of wine.

I exude aromas of berry and spice while leering from the decanter in a purplish way while LB’s parents make him wait to sample me. On the palate I’m full-bodied and rich with earthy notes, firm tannins, and a long finish. I’m mature without having a musty Old World character, and you can’t really beat me for $14.95.

I’d like to say I appeal to all drinkers, but I don’t think hard-core alcoholics (LB excepted) are buying me very often, as they gravitate toward massive jugs of vodka and giant boxes featuring marsupials. Basically, I’m here for everybody, but if you like to spread your $14.95 more economically, you might pass me by.

Most wine drinkers have no idea we have hit “peak wine,” and that global demand for  wine is outstripping supply. In other words, you might be drinking wine because everybody else is. Some wine drinkers choose wine because they think beer will make them get fat or watch hockey. Some wine drinkers follow Robert Parker, who gave me 90 points, although he probably only swished me around his gums for 30 seconds or so. Drinkers like LB are thoroughly indiscriminate, so who knows? I have no idea what people want.

5. How do they change as a result?

They often get really freaking plastered, especially if they have a bottle to themselves.

Okay, so this isn’t working out exactly as I thought it would. Maybe you need to be sentient, like we are, MFI. This last statement—and I hope you’ve been following along with your own notes for this exercise, my fellow inebriates—this last statement is supposed to be the key to YOU and what you bring to the table. If you answer the five questions, you should be able to take your answer to number five—and voila! There’s your elevator pitch.

I expect my dad will be so grateful for this that he’ll buy me another bottle.

If I hear another parental exclamation about how expensive this season is and how booze is a “luxury,” I’m going to lose my furry mind. The budgeting conversation was so boring today that I rested my head in the curve of a bunch of bananas for most of the day, drowning out the banality.

Okay, maybe that doesn’t sound too understanding. As a bear without a social insurance number, I’ve never felt any obligation to bring home any bacon (barf—that’s for you, Hanukkah Harry—bacon is blech). So I don’t know how to budget, shop, do taxes, save, open an RRSP or any of that financial stuff. Why would I? It’s totally boring.

Except. Except that all this budgeting curtails my wine consumption.

I like exploring wines a lot, especially nuanced vintages and off-the-beaten-track varietals. I love detecting the layered scents before taking that first, tentative sip and disappearing into a wondrous, sensory ravishment by an exceptional wine.

But let’s face it, I’m a raging alcoholic, and the important thing is to keep wine in the house. If that wine is in a box, so be it.

My parents do not agree. They draw the line at boxed wine and will not stoop below the $10 mark. No matter how engagingly a liquor store’s $9 shelf talker ogles them, they will not purchase wine they can actually afford. Instead they keep a dry house for days on end and then spring for an occasional “decent” bottle.

Of course this is total BS. It means long periods of dreadful shakes and shivers, not to mention desperate cravings and urges to taste Windex and Clorox. The other day I drank half the vanilla in the baking cupboard, only to discover it was artificial and devoid of alcohol. If only my parents would invest in a friendly box of cheap plonk, I could park my mouth under the spout during these dark times and stop being the nuisance they say I am.

Still, I have to applaud my parents when they find something cheap enough to buy and drink without feeling guilty. The latest find, CASTILLO DE MONSERAN CARINENA OLD VINES GARNACHA (2007), was recommended by their local liquor store consultant, who pointed out that Spanish wines at the store often boast slightly older vintages, presumably because they tend to trickle more slowly to the North American market. Thus you can find, with a good consultant, some spectacular buys on mature wines that can certainly hold their own against the pricier Australian, US and Canadian bottles. 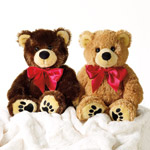 I’m wondering how we can get to know this wine consultant of ours a little better. My parents say he’s young and very friendly (which puts him out of their league as a potential buddy). If I wish to meet him, I may need to stow out of the house inside a purse or jacket pocket. The only problem: the liquor store is currently overrun by bears for its annual Share A Bear program, and I’m not sure what species they are. If they’re grizzlies like my friend Scarybear, then they will make things very difficult for a handbag-riding interloper, and I might end up getting the crap kicked out of me.

The reason I want to get to know this wine consultant (whose name my parents can’t even remember) is that I suspect he goes to tastings, and he might not object to taking along an alcoholic bear. Of course he might not have a man-purse that I could ride in, but maybe he has a backpack or some pockets. It would depend which pockets and where they were on his anatomy, because I wouldn’t want things to get weird.

That dude would be good to go to a tasting with because he certainly has good judgment. CASTILLO DE MONSERAN OLD VINES GARNACHA ($13.99) was a phenomenal surprise; even before it opened up, one inhalation revealed its promise. Ripe and full, this traditional old-vine Grenache bursts with plum and dense cherry, balanced oak and hints of olive. Remarkably complex for a Grenache, CASTILLO DE MONSERAN is lush yet structured, with a deliberateness about it that tells you these particular Spanish dudes know their craft.

I felt such sorrow when the last drop was drained, I had to curl up with the bananas on the counter. A spectacular value, CASTILLO DE MONSERAN OLD VINE GARNACHA is worth buying by the case.