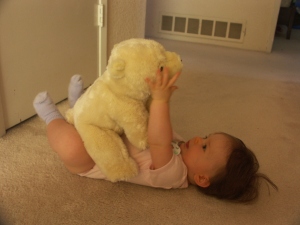 You may not remember Glen…. Big fluffy polar bear…hates summer, likes the freezer, could devour a whole seal if one flippered its way through the house….

I started looking for Glen last week when the temperature dipped under 0° (Celsius, my fellow inebriates, otherwise I would have been dead). Glen only really likes his environment when it’s freezing cold, and it’s the only time he’ll allow a cuddle. I needed him to warm me up. And that’s when I realized he’d vanished.

Scary, me, Glen Bear, and Carnivorous Duck, late 2006. Only Glen was happy about the snow.

My dad said he moved with us for sure back in August. But I can’t really remember. The last time I saw him, the kids had stuffed him into some tight space—maybe a backpack or a box—but what happened to him after that? I don’t even remember which house we were living in then!

It’s sort of a good lesson about drinking, really. Being blasted all the time, I haven’t paid enough attention to Glen’s whereabouts. A big animal like Glen could lumber off anywhere. Polar bears have ridiculous olfactory sensitivity; he might have smelled a female down the street and gone off in pursuit.

Miss P says he didn’t go anywhere. She says Glen “doesn’t really walk.” I said of course not, of course Glen doesn’t walk—he has more of a four-legged gait. 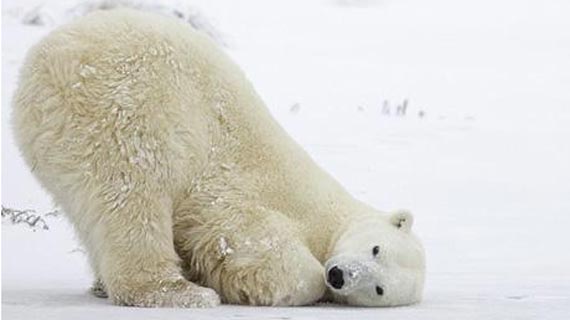 Glen looks more like this when he drinks Polar Ice.

So where is Glen???? The kids are curiously unconcerned. One thing is clear, though—if I’m to manage my anxiety, I’ll need some liquor. Not vodka, though—that would remind me of Glen. Maybe ROBERT OATLEY SHIRAZ (2009).

The Mudgee region is one of Australia’s less-advertised wine areas, known mostly for providing blending grapes for such larger wineries as Hunter Valley. ROBERT OATLEY SHIRAZ represents a Mudgee play for higher status. Let’s open it.

Glen has helped me open bottles occasionally, mostly by smashing them, but in his absence my parents had to help. First impressions are earthy, peppery, dense fruit with a hint of taxidermy. The scent does not radiate good behavior, but 14.1% is what’s needed to contend with an anxiety like Glen’s disappearance.

The first sip of ROBERT OATLEY SHIRAZ is a reinforcement of concentrated fruits: blackcurrant, tinned jam, decent acidity, moderate-to-aggressive tannins, and distant wombat farts. Which is to say: it’s not half bad. For you solidovores, it would pair nicely with savory foods, barbecued meats and such. For my “liquids-only” friends, it’s a bit of a chore on its own. Likely you’ll be comparing it to the last really good Australian Shiraz you enjoyed—and there are so many out there that comparisons will pop out immediately. ROBERT OATLEY SHIRAZ approaches the good-natured drinkability of its typical $20 Australian cohort, but it evinces too many conflicting and barnyardy notes to hang with truly awesome Shirazes. It’s just okay, and maybe even a little obnoxious.

Drinking a bottle of Shiraz did not sharpen our memories as to where we last saw Glen—not mine or my parents’. As for the kids, they think maybe he went with them to Nana and Papa’s. Or to school. Or no, maybe not either. They don’t care; they’re watching TV.

Leave a Reply to Emily @ The Waiting Cancel reply