In a quest to find philosophically compatible scientific studies, I’ve learned the following:

Teetotalers are more likely to die than moderate drinkers.

Yes, my fellow inebriates, it’s true! Scientists at Virginia Tech conducted a five-year study and found that lifetime abstainers were 19% more likely than regular drinkers (one or two drinks, three or more times a week) to die.

And get this—the same study found that teetotalers were 56% more likely to experience coronary heart disease than average drinkers. OMG! And lest you think this was a small study, the data came from half a million North Americans.

This is exactly the sort of data I was seeking when I embarked on a short Internet search this morning. I probably should have stopped reading right there but instead I foolishly continued to the ad absurdum conclusion:

Heavy drinking is more detrimental to health than abstinence. (But not by a lot! Boozers still have better cardiac profiles than abstainers.) Perhaps the health detriments they ascribe to drinking involve wandering in front of buses, etc.—it’s probably a catch-all collection of hazards that drunks like myself blindly embrace.

So how does the study define “heavy drinking”? Well, the definition is actually pretty strict: three drinks, three or more times a week. Which sounds like breakfast. Thinking this definition seemed assholish, I decided to contact the study’s authors, but I couldn’t find the actual study—just the Men’s Health distillation of it from which I cobbled this post.

So is there an actual study, or is the alcohol industry behind it all, and if so, why does the study not promote my lifestyle, which would sell the most booze? If there is a study, it certainly has some potential haters: 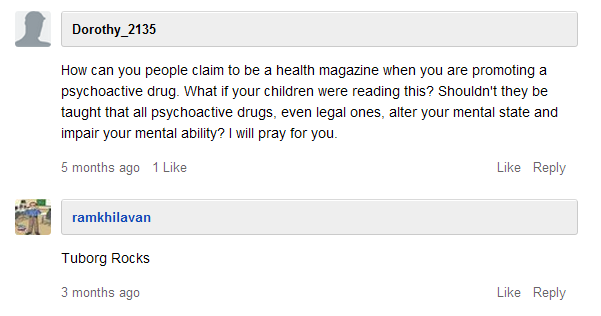 The upshot? Feel good about drinking here and there; it’s beneficial. For those of you sharing the dark side with this alcoholic bear, just make sure you use the crosswalk 😉

One thought on “Think abstaining will make you live longer? Guess again!”