So how are we doing on our New Year’s resolutions, my fellow inebriates?

Apologies for the royal “we.” There are certainly no LB resolutions, unless you count the ongoing goal of opening bottles without benefit of thumbs.

Is it even particularly good for us to make New Year’s resolutions?

Psychologists say no, it isn’t. Fully three-quarters of the resolved fail in their pursuits, ending up more dispirited than before. Even simple resolutions—such as going to Walmart without exposing a private orifice—elude some people year after year.

The problem with resolutions is that by definition they focus on negative behaviors. Even when they’re couched in positive language, they tend to have an obvious dark side that starts beckoning after a few days or hours of the new year. Focusing on quitting drinking, as an obvious example, leads to obsessive thinking about alcohol. It’s true!

So how do people succeed at keeping resolutions?

But how do we apply all this shit now that it’s already 2012? Isn’t it too late to make resolutions? 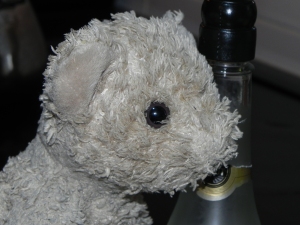 Well, no…there’s nothing magical about New Year at all. In fact, New Year is one of the worst times to resolve to do anything. It’s winter, there’s food and drink everywhere, people are visiting, the mood is celebratory, the gym is crowded, and if you’re a bear you should really be hibernating.

Why not resolve to wait for the optimal time to do something? Then do it.

For me, that thing is discovering how to open wine bottles with my paws. Now that I know the year isn’t lost, I can still make it happen.