My mum told me she dreamt last night that I was doing my own typing. With my paws, no less. 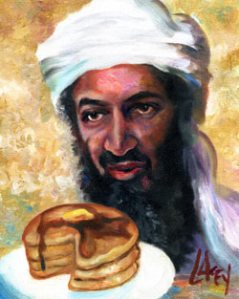 It's okay to serve pancakes.

This dream sounded ominous to me and possibly related to yesterday’s suggestion of a breakfast brainstorming session with the gents from BROKER’S GIN with my mum slinging pancakes on the sidelines.

Her dream did seem tinged with threat. I said, “Don’t worry, proper gin enthusiasts skip breakfast; they just mix their gin with juice in the morning.”

“So you could just squeeze us some OJ or something.”

I had a split second to ponder the angst my mother’s humorlessness and now undeniable middle age must cause her before she chucked me in the toybox.

Thankfully the box got cleaned with Windex yesterday. I could even taste the residue on the plastic. So at least it wasn’t full of weird detritus and petrified mysteries. So I had time to think about all kinds of miscellany: When will my Obama & Penelope the Unicorn print arrive? What kinds of juice go nicely with Cachaca? Is Dolly somewhere in the box? Is it true about the carbon dating on the Shroud of Turin? Why hasn’t Hanukkah Harry visited yet (or has he started consolidating eight visits into one to be more environmentally friendly)?

But mostly I was thinking about a nice gin & tonic. I’ve been so fixated on BROKER’S GIN lately that I haven’t given much attention to its competitors. Let’s talk TANQUERAY.

Even older than the venerable BEEFEATER, TANQUERAY SPECIAL DRY GIN dates back to 1830 when son-of-a-clergyman Charles Tanqueray first “traded in the church for the still.” Quadruple-distilled, TANQUERAY boasts a slightly smaller botanical array than many of its competitors: juniper, coriander, angelica and licorice. The result is a snappy, focused gin that makes a distinctive martini while being powerful enough to punch through the tonic in a G&T.

I had no idea (thank you, Internet) that TANQUERAY had merged with GORDON’S in 1898. This upset me a little because GORDON’S really has nothing on TANQUERAY, making the merger a typically cynical bid to cover all bases in a market with variable purchasing power. Don’t get me wrong; I would drink GORDON’S, but not if I could have TANQUERAY, which admittedly I would drink even if you wrung it out of dirty underwear into my mouth.

Which is to say TANQUERAY really is all that. Straight up it conveys pine to the nose, and then delicate juniper and citrus undertones. The distinctiveness of these flavors is the reason TANQUERAY makes such a rad martini, although purity aficionados (and habitual vodka drinkers) would no doubt prefer its cleaner-tasting super-premium sibling TANQUERAY 10. I’d honestly rather have the dirty little original at two-thirds the price—it has more character, and if you truly appreciate gin, character is what it’s all about.

Finally my mum retrieved me from the toybox. She said it was hard to channel my thoughts when I was so unhappy, but that if I ever expressed any further notions about her stringing on an apron to serve my Old Boys dick-stroking gin-drinking club she would %&*#!/$* bury me. OMG!