The one time I watched The Big Bang Theory I ended up cowering under the table, finally done in by its relentless laughtrack, desperate to escape the canned exhortations to roar with uncontrollable mirth at see-it-from-a-mile-away comic set-ups that warranted a snicker at best.

I wanted to like The Big Bang Theory. Several respected (if not respectable) friends had recommended it. Multiple awards commend the show. The geek/physicist characters couldn’t be more lovable in concept. The Big Bang Theory doesn’t even seem to be a guilty pleasure for its following—fans openly and wholeheartedly recommend it to friends as one of television’s rare gems.

But instead of happily joining the bandwagon I found myself cringing, paws to ears, so distracted by frantic machine-generated pseudolaughter that I could barely follow the plot. True, I was drunk, and, also true, bears have very sensitive ears. But the laughtrack problem went beyond those issues. It made me want to run away.

Thing is, I didn’t mind the show. It was kind of quirky and fun, and I could imagine getting to know the characters. But I couldn’t stand the obnoxious cues to laugh. It was like having a jackboot on my larynx—Laugh! Laugh, you piece of shit! Laugh! Don’t you know it’s funny?!

I think it was actually less funny because of the laughtrack.

There are plenty of TV shows that fly without a laughtrack: The Office, 30 Rock, Entourage, Family Guy—you name it. They use musical cues to emphasize comic timing, plus they’re funny. They’re actually funny, and you can tell because you’re not being hammered into submission by that unceasing, slider-controlled background noise.

Being told to laugh is sort of like being told by a shelf talker that a wine is worth 88 points. Only it’s a screamingly loud shelf talker that doesn’t understand you’ve already decided to buy the wine and are prepared to enjoy it—it needs to keep yelling at you that it’s great, Robert Parker swilled it for five seconds and pronounced it worthy, it’s awesome, it’s great, it’s an 88, 88, 88, 88, eighty-eight, eighty-plus-eight, four-score-and-eight…arggghhhh!

I have no idea whether Robert Parker has reviewed ROBERT MONDAVI WOODBRIDGE MERLOT (2010), but that was the wine that got me drunk the night I watched Big Bang Theory. Shared among four glasses (each of which I visited repeatedly) rather than decanted, the dark ruby merlot sheeted smoothly on the Reidel stemless ware and then formed long legs. Cherries, plums and raisins were the frontline aromas, with a subtle hint of spice.

On the tongue the merlot delivered on its dried-fruit olfactory promise, supple and juicy yet dry. Not overly tannic, the wine boasted concentrated flavors and a decent finish. It was ideal for a social occasion featuring distracting conversation and pre-K kids under the dinner table—not so complex that it demanded undivided attention, but satisfying as a table wine and a meal accompaniment for those who like to eat solids.

MONDAVI WOODBRIDGE MERLOT certainly didn’t require any cheerleading to be enjoyed. At $13.99 and 13.5% alcohol it fit the evening nicely, and hey—a shelf talker didn’t tell us to buy it. Too bad for us we followed it with a bottle of MONT GRAS SOLEUS, but even that was a windfall for me, because I got to finish what others wouldn’t.

And that’s why I was drunk for Big Bang Theory.

It was the six-year-old. I figured she had a frilly dress ready for me—as good a reason as any to yank me out of bed. I had a crashing hangover thanks to my parents’ wine snobbery, but more on that later. I went submissively with Miss P.

She carried me to the kitchen table, on which sat an envelope, addressed to LB (!). And inside….

I am so happy. 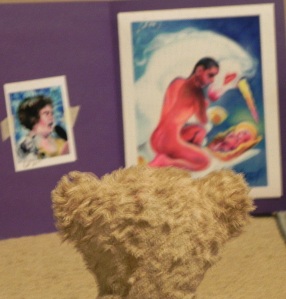 My joy almost negates the ill-effects of drinking the lion’s share of the Chilean cab we had last night. I was excited when I saw the bottle of MONT GRAS SOLEUS Cabernet Sauvignon (2009)—every Mont Gras product I’ve tried previously has been top-notch for the price point. Organically grown grapes seemed a further plus. The Los Guindos vineyards were planted between 1998 and 1999 about 50km from Santiago and managed organically from the get-go. SOLEUS is made from 100% hand-picked organic grapes and goes for $13.99 at our local booze shop.

A lucky string of excellent sub-$15 red wine finds (reviews to come) over the holidays had perhaps jacked up my expectations, as well as those of my parents. We don’t typically let wine languish in this house, but when the SOLEUS was poured…it sat.

The color is ruby red and enticing. In the glass the wine sheets, with legs quickly forming. From three feet away it induces salivation.

Three inches’ distance is another matter. Intensely aromatic, SOLEUS has an unfortunate petrol-like topnote with chicken-coop accents. These oddities—fortunately—are caught up in a dried-fruit onslaught, a heavy abundance of ripe red berries with lashings of tobacco and vanilla. The effect is disconcerting and palate-bothering. If you can get past the initial aroma, the front sip is quite acceptable, followed by a confusing mid-palate jockeying of flavors and a borderline-offensive ending.

Which was super for me, because my parents quietly abandoned their glasses, leaving the wine for me to finish. I got freaking wasted, my fellow inebriates. I have no idea what time they carried me to the bed I share with three other bears (who were probably relieved that I was too insensate to grind up against them).

All in all it was an awesome evening. The hangover was par for the course, and it was ameliorated wonderfully today by the contemplation of art.