My mum likes cooking, but not enough to do it sober. That’s why, when Auntie H called to ask what she should bring for dinner, Mum said wine. Auntie H was hesitant; she said she didn’t know anything about wine, so I got on the phone and coached her through it. Well, actually I sat beside the phone gesturing madly while my mum claimed to be just joking about requesting wine. Dammit, we needed that wine, no matter what crazy bottle Auntie H and Uncle B might choose.

We especially needed wine because Mum had committed her annual profligate crime—she’d poured a bottle of LANGA REAL DE ARAGON over the turkey, torturing any liquids-only folk and animals (okay, just me) to suffer the sizzle of quickly evaporating alcohol off the browning poultry as whatever angels inhabit the LBHQ oven greedily guzzled their supposed share. It was horrible, people, but of course you know I’m getting used to it. Apparently it makes good gravy, but that doesn’t make it forgivable.

We did snatch one glass of LANGA REAL DE ARAGON, noting the 90-point Robert Parker accolade it wore around its neck before the cork got popped. Not bad for $13.99—could it be true, or was Parker just hammered when he made the call? 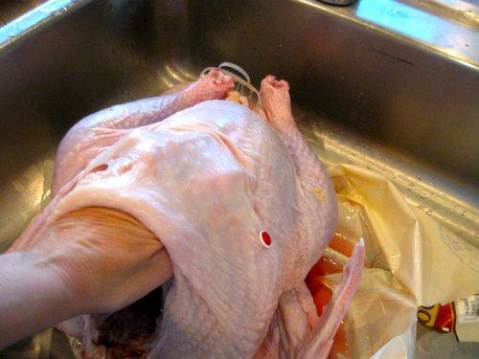 Don’t let my mother do this to you, my fellow inebriates!

It was true. OMG, my fellow inebriates, it was true. LANGA REAL DE ARAGON is crisp and subtle, wafting bright orchard goodness and biscuit notes. Fresh and lively on the palate, this Spanish bubbly deserved to be drunk, not sacrificed to the turkey. Gravy be damned!

Once the sparkling wine was gone I felt very morose. But luckily Auntie H and Uncle B arrived with their two monkeys and not one but TWO, count ‘em, two bottles of wine. Check it out:

Now, if I can only get the bottles open…