Running out of alcohol feels like the end of the world, which—especially here in 2012—got me thinking about actual Armageddon.

How will it come when it comes?

Are we prepared? What does “prepared” even mean when we’re talking about wholesale annihilation?

Sobriety is a bitch but I have to admit it makes it easier to read Discover Magazine. I like the way Discover’s Phil Plait (Death from the Skies!) calculates the odds of each of ten flavors of cataclysm occurring. In a way it’s reassuring—in a way not. Then again, the only proper reassurance is a headful of booze to make his scary ideas go away.

But I’m going to deal with one of them today: asteroids.

Phil Plait calculates 700,000:1 odds of anyone dying from an asteroid impact. Those are vanishingly long odds, considering you have 18,000:1 odds of being murdered (and 2:1 odds of getting away with murder; consider that). Chances of a meteor crashing into your particular house? Try 182 trillion against. Chances of you getting hemorrhoids? You just need to be the lucky 1 in 25.

So it doesn’t make sense to worry about an asteroid slamming into the planet. Nobody used to fret about it, even with the 1908 Siberian event as a cautionary reminder that there’s an asteroid belt out there between Mars and Jupiter that slings the occasional city-size chunk at us. Plenty of asteroids have grazed us over the years, but we were blissfully ignorant. That or we realized our close call after the fact. Some of them, like the bus-size rock that glanced by us on Wednesday, would have disintegrated in the descent through our atmosphere. Others, such as 1,300-foot-long 2005 YU55, which whizzed within lunar distance last November, needed only a little English on their trajectories to take out entire cities.

Holy shit, how often does this happen?!

Well, it doesn’t occur nearly as often as painful hemorrhoidal itch does. Hemorrhoids are an absolute epidemic compared to asteroid hits. Worse still, your odds of getting hemorrhoids increase if you enjoy binge drinking. Tales of alcoholic woe abound:

Leaving aside the profound effect hemorrhoids seem to exert on spelling and punctuation, they do sound like a dreadful death knell for the party lifestyle. What are the wretched things anyway? 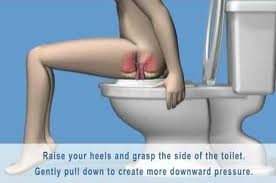 I should mention that he has an enviable liquor collection and rec-room bar. But is curtailing his drinking the only way to rid himself of the burning sensation of hemorrhoids?

Of course not—how silly that would be, and how intolerable. Here are some medical recommendations:

And of course there are all sorts of other ways to strain the anus. You may have a favorite way, or even several favorites. The important thing is to realize that your anus needs a rest now and then. It is your friend and you mustn’t mistreat it.

But is alcohol necessarily contraindicated for hemorrhoid sufferers? Scientific reports conflict, besides which they are brain-numbingly full of numbers and terminology. I couldn’t make any sense of them at all, but they do conclude that alcohol’s contribution to hemorrhoids is dose-dependent. The upshot is that there’s a definite sweet spot when it comes to drinking—an amount that will allow you a few drinks yet permit your anus to thrive.

OMG, what amount is that? you may well ask. Sadly, I don’t have a clue. I don’t even have a functional anus, my friends.