Transman reminded me today that the Canada geese are back. You can tell by all the green goose poo on the sidewalks along 64 Avenue and 201 Street, one of our habitual routes around Langley. The geese congregate by the liquor store, honking and shitting their assurance that spring is here. 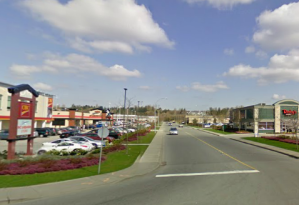 Where the goose poo is in our hood

I had wild animals on the brain because of yesterday’s post about roadkill cuisine. It was a post that prompted a follower or two to discontinue reading Liquorstore Bear, perhaps because it espoused a roadkill diet (“freeganism”), perhaps because of a cynical link to Pascal’s wager, or maybe because somebody couldn’t handle the truth about the would-be payload on Noah’s Ark (We’re taking on water, Japheth! Jettison the dinos!).

As you know, I’m not a food guy, but I still appreciate the question. Chicken cordon bleu? Chardonnay. Pad Thai? Sauvignon blanc. Prime rib? Shiraz or cab. Wine/food pairing notions have achieved pretty good societal penetration; everybody’s got a loose idea of what goes with what. But roadkill poses a challenge. And if you’re still with me, I hope it’s because you won’t mind this handy guide:

Social convention, and nothing but, separates such animals from the ones you find in Save-On Foods. That and the fact that they’re gamey, riddled with ticks and often carrying TB. But don’t let that stop you—just cook ‘em really well.

Of course you know, my fellow inebriates, all this comes with lashings of hypocrisy. I don’t eat meat myself, and I feel anxious on behalf of my fellow animals on the lower part of the food chain. (I couldn’t very well recommend a wine pairing with bear, for example.) The geese worry me especially with their frantic honking and sudden movements. What’s to prevent anyone from pulling over the car on 201 Street, putting on the emergency lights for a minute, and hacking a goose’s head off with a machete? 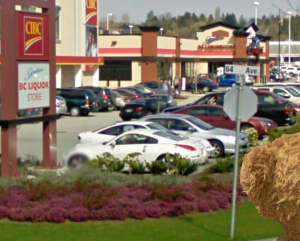 Such a person would need only make a 180° turn to find the liquor store. They could stow the spurting goose in the trunk and shop for a complementary wine—Riesling, Gewurztraminer, or even Barolo.

This isn’t something I picture either of my parents doing. They are totally boring people. But they do frequent that liquor store, where there is a very good consultant, who recommended THE GARDEN PATH SHIRAZ CABERNET SAUVIGNON (2006). Made with fruit from Australia’s well regarded Langhorne Creek vineyard, this oak-aged blend exudes ripe currant, berries, and floral notes—leggy and purple in the glass. Medium- to full-bodied, THE GARDEN PATH is lush on the palate, fruit-forward but delicately balanced: a lovely, controlled fruit symphony that rewards the drinker with a satisfying finish.

Such a wine deserves to be enjoyed for its own merits, and THE GARDEN PATH offers such an intriguing array of taste harmonies that the best thing to do would be to decant it, then focus on every sip. But if, just before you unscrewed the bottle, the scent of barbecued squirrel happened to waft from your neighbor’s yard, you might want to put the bottle under your arm and invite yourself to dinner. (You might.)