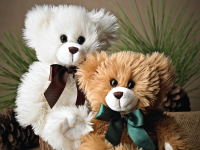 My neighborhood booze shop is full of new products, including its annual explosion of bears looking for homes (for $11 you get to keep one and its twin gets donated to charity). This year’s bears are cheeky-looking little characters who probably dive into the booze as soon as the last liquorstore employee goes home for the night. In other words, they are up-and-comers—potential rivals even, one of whose number might well end up in Santa’s sack on the way to LBHQ, to be hit on by my furvert girlfriend Dolly.

If you put these two brews on a Venn diagram, they’d look like this:

They are both inky and viscous, one with a prickly, hoppy presence and thick, chewy mouthfeel—the other super-friendly and sweet, just like a cuddly sweater.

As my dad said when we opened the specialty bomber, “These guys really know their stuff.” Indeed, two of Parallel 49’s brewers have chemical engineering degrees, a better use for which than brewing beer I cannot imagine. BLACK CHRISTMAS is brewed with fresh 100 Mile hops, whose forwardness have the potential to dominate excessively—BUT Parallel 49 pulls it off. Stopping just short of in-your-face hoppiness, they’ve crafted a viscous, chewy, strong beer, blackened by toasted wheat and wafting subtle Christmas aromas such as raisins and pine. Once again, the key is subtlety. The hops may be strong but not to an ass-kicking point, their bitterness being mitigated by some nuanced tasting notes that make you go mmmm. Pound this stuff in quantity and it’ll flatten you with its 6.9 alcohol percentage. But you wouldn’t pound it, because it’s pretty thick. Well, I would pound it. But only because I knew we had UGLY SWEATER waiting in the fridge.

Parallel 49 wanted to put the Grinch on the BLACK CHRISTMAS label but the idea was kiboshed by the Liquor Distribution Branch (because the Grinch appeals to children). News flash: beer appeals to children. If we poured Miss P a glass, she would drink it, but we’re keeping it for the big people and wild animals.

What the hell is a milk stout, I wondered? Turns out, if you add lactose to the brew you end up with a delectable, creamy viscosity without punching up the alcohol (the lactose doesn’t ferment), achieving the quintessential session ale (a moot point since UGLY SWEATER is too delicious to nurse for long).

Malty, toffee sweetness is the top note, with cappuccino hints and just enough bitterness to remind you this is a beer, and a damn good one. So fetching is UGLY SWEATER and so generously does it coat the palate that you cannot nurse it, in a blink it’s gone, and you’re left wondering if Miss P somehow sneaked half your bottle while you weren’t looking. UGLY SWEATER is wonderful. I would give half my undiscovered nards for Parallel 49 to launch it as a year-round brew. For now it remains a winter offering, so get your paws on it while you can.

My dad is right—these Parallel 49 guys totally know their shit. Even if you’re not a fan of hoppy beers, and even if the idea of milk ingredients turns you off, breaking out of your comfort level and trying these beers will pay off in lovely drunken dividends.