It’s World Aids Day today, and doctors say we are winning the battle against AIDS. That’s a great reason to celebrate. My first impulse was to make it a shot (equal parts of vodka and peach schnapps with ice and a splash of cranberry juice, strained into shot glasses) and slam away. But my mum said maybe I should do a little reading about HIV/AIDS before hijacking the occasion to get pissed. 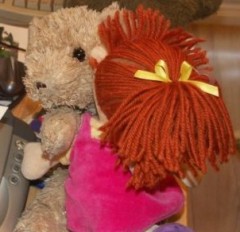 My girlfriend Dolly was less diplomatic—she said I was an effing retard and that she was never going to help me find my junk ever again. She said it was better for the world that my orifices are all sewn up. I thought this was pretty abusive, not to mention politically incorrect, and it sure didn’t get me any closer to becoming knowledgeable about AIDS. Particularly I wanted to know if carousing is in order on World Aids Day, if only to celebrate the triumphs of medicine.

My confusion came partly from some 1980s advertisements and mostly from a peculiar crystal skull full of vodka that I drank for breakfast. Then I got distracted by the People of Walmart, because I’m basically an idiot.

Bears like me don’t have livers or immune systems, but most people do, so my mum asked me to remind my readers not to actually take my advice. I said my readers are smart—much smarter than I—so they already take things with a grain of salt. She said fine but that if I made fun of people with compromised immune systems just to get a cheap laugh then she would shitcan my whole website. OMG! My mum is humor-compromised.

There are a lot of reasons to be happy today. Thanks to medical advances many people are living with HIV, enjoying their lives on a one- or two-tablet regimen without developing AIDS. HIV-positive parents who conceive a child have a 99% chance that their child will be HIV-free. For those who do test positive, life expectancy is now 72. Awareness is increasing, so there’s more openness, less stigma, and fewer dumbasses who think they can “catch AIDS” in the air from a gay coworker.

There’s still work to do. Wear a red ribbon, make a donation, click the Like button, get involved. And drink a (moderate) toast to the cause.