OMG, my fellow inebriates. I glanced at the gerbil tank (which I rarely do because I’m terrified of the gerbils’ ability to chew and shred). And what did I see? 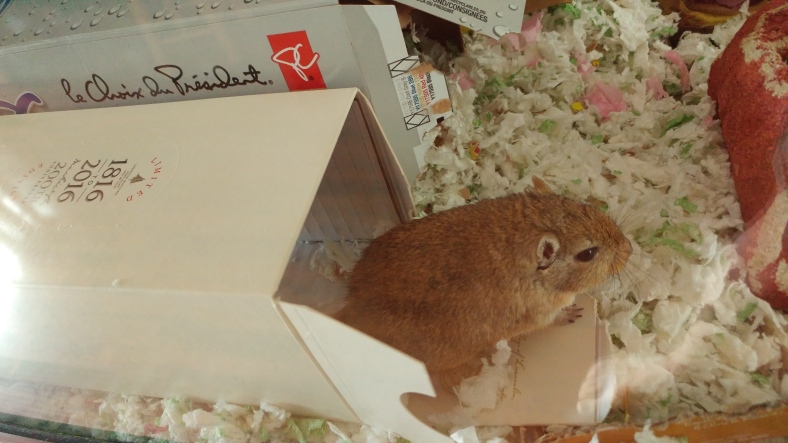 It was Cocoa the Gerbil, villainously gnawing on the box that used to contain LAGAVULIN 8 YEAR OLD 200TH ANNIVERSARY WHISKY. Where did he get that box??? And where was the bottle?

In a panic I ransacked the kitchen looking for the bottle. Surely it had to be there, with the two inches I remembered of smoky, peaty yet round and buttery not to mention complex whisky. OMG, where was it? Under the sink I went looking for at least an EMPTY bottles from which to inhale the tarry, honey-roasted, briny dregs. But the recycling had gone out days before, apparently with my precious Lagavulin.

This was unforgivable. Not just because my dad and his friend R had finished it, but because Cocoa was now having his way with the box! I’m terrified of Cocoa at the best of times, and here he was lording it over me that my beloved whisky had been drained.

What the hell was I doing while Dad and R inhaled its sublime smoky yet fruit-forward notes, then sampled its gently charry, burnt-sugar flavour with its hints of licorice and seaweed followed by a baking-spice kick? WHAT WAS I DOING?!!

I was avoiding Cocoa, that’s what. My dad has finally found an effective guard for his liquor. As long as that gerbil tank stands between me and the kitchen, all booze is off limits.

Glen Bear has still not materialized anywhere at LBHQ.

Last night Blackie and I had a good cry about it while Fluffy observed us emotionlessly and Scarybear attacked a plate of ginger cookies, which he would have done anyway.

This should not be a sorrowful time of year. This is Glen’s favorite time of year, when his big, thick coat of white fur is his best asset and he doesn’t mind cuddling.

But he’s gone. He seems to be…really gone.

It didn’t seem respectful to drown our sorrows last night, but what the hell else was there to do?

Blackie Bear isn’t an alcoholic, and he has some common decency, so he hesitated—but not after we’d got the CANADIAN CREAM open. The lid wasn’t even tightly on, my fellow inebriates, it was a cinch. This means my mum was into it last. With her habit of returning jars and bottles to the fridge and cupboards with the lids barely on, my dad won’t even pick up a jar or bottle by the neck any more; it’s too dangerous. He retaliates by closing jars and bottles so tightly that she in turn can’t get them open without asking him nicely. This is the state of their marriage. It’s also how I know who’s been into what most recently. And my mum has apparently had some of my liqueur, otherwise Blackie and I wouldn’t be able to pour a toast to Glen.

Ahhhh, I know you’ve been wondering how our CANADIAN CREAM turned out. Or maybe not, in which case, here’s a picture of some people shopping at Walmart.

When we first made the CANADIAN CREAM it seemed a little thin. Then again, we couldn’t remember the exact consistency of Bailey’s. (And no one would buy any, even to be scientific.) Over the last 17 days our concoction has thickened noticeably, achieving what seems to be the right viscosity. How does it smell?

The aroma is comfortingly familiar—definitely in the neighborhood of Bailey’s if not right next door. The top note is milk chocolate, a full cup of which went into our recipe. Next time we should probably reduce this a little. 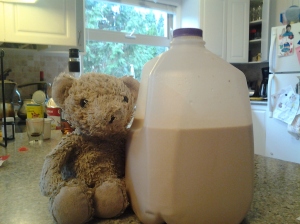 Under the chocolate is the scent of delicious whisky, mellowed somewhat by a fortnight in a plastic milk jug. Of course it hasn’t really aged; whisky ages in casks, after which it ceases to mature. If it were to take on the characteristics of a two-litre plastic jug…well, we wouldn’t really want that. But somehow our three cups of Wisers have married nicely with the milk ingredients; the mixture doesn’t have the same searing booziness it had when we first poured it into the jug. Which is to say, it’s become less appealing.

The container needs a vigorous shake. Some of the chocolate has settled down to the bottom—not in chunks or particles, mind you, just a layer of darker chocolatiness that reluctantly goes back into solution if you jump up and down with the jug for a while.

CANADIAN CREAM coats the ice cubes in a crystal rock glass, looking eerily like Bailey’s but naggingly not. It is thick and creamy, but not as smooth as it should be. It foams a little over the ice instead of settling into a smooth, placid surface.

Not only is Glen missing; so is the camera charger. Not only THAT; my parents have refused to buy Bailey’s Irish Cream to compare with our custom hooch. Luckily, someone else on the Internet has taken such a picture already. The one on the left is Bailey’s. The one on the right is homemade.           cocktailhacker.com

The consistency feels right. But there is something missing in the taste. And something added.

“Good, but dude…this isn’t right. Is there any more?”

“It’s not right, but Glen would want us to have it.”

The upshot? A sense of dissatisfaction. A longing for the exact right thing and a sense of discomposure at not quite having it. Kind of like if someone suddenly produced a polar bear who looked just like Glen but was really just one of his Animal Alley™ twins. Not our Glen with the stained paw. Not our Glen whose fur Miss P decided to trim one day. Not our Glen who warms me up with a winter cuddle.

Our Canadian Cream is almost ready for consumption. Not that we haven’t had a small sip already, but at the end of this week it should be as good as it’s going to get—i.e., ready to chug. I have a few nagging worries, though.

When we made the liqueur, we bought a one-litre carton of whipping cream. Two and a half cups went into the mix, my mum put half a cup or so in some solid-food risotto-like thing, and the rest sat in the fridge with nothing to do. Recycling day came along and, since the unused cream was two days away from expiry, we gave it a sniff. OMG! Holy shit, people! That cream smelled rank. Holy crap, two days early the stuff was horrid. Mum poured it down the drain and rinsed the carton…but it was hard not to look at our giant Canadian Cream jug and think…the same cream’s in there! OMG!

That’s really the reason we got into it early—to make sure it wasn’t off. You wouldn’t want to take a big slug of sour milk products and end up barfing. But it smelled fine. It tasted fine.

Alcohol keeps food from going off.

So what is this amazing preservative power of alcohol all about? How does it work?

Simply put, alcohol is poisonous. At concentrations above 15 percent, bacteria and fungi can’t survive. That having been said, cream-liqueur experts advise against keeping homemade concoctions more than a few weeks, and only then in the fridge. Roger that—we’d better finish this shit now. Review…on the way 😉

To this sage advice, my mum said, “Oh. I guess we’d better not make another batch then. It’ll be enough to get through this lot.”

This is exactly the opposite of what I meant. Of course we should make another batch. Right now.

But instead she said we were going to make whisky balls.

I was immediately suspicious. Another recipe requiring us to cook with booze? OMG! The angels’ share is supposed to be miniscule—the tiny portion that evaporates naturally, not liberal gases spewing into the air from a hot saucepan. Damn it, why do the angels get any of our booze? Aren’t they supposed to be perfect creatures? Not addicts jonesing in distillery cask rooms.

“Relax,” said my mother. “Behave yourself.”

They’re just like rum balls, which you don’t cook either—only they’re made by people who are too ungenerous to buy rum for loveable bears who have repeatedly requested it. Whisky balls are a not-horrible-sounding variation on rum balls. Let’s do this shit.

Here’s what we need:

Life is a compromise at LBHQ, so we’re using graham crumbs. We have to do this without Miss V seeing, or she will demand a bowlful of them (not that she would deign to eat a graham cracker).

Walnuts…the kids will bitch a very great deal if walnuts go into this recipe. But perhaps they shouldn’t be the arbiters of our whisky-ball ingredients.

Corn syrup is one of those things that doesn’t age, and ours is probably older than I am. We’re going to use it anyway.

As for throwing half a cup of Canadian whisky into this recipe…what the hell. The plastic Wiser’s jug is enormous and its somewhat atonal siren song has been relentless lately—better do something with it other than just pound it. Sigh.

Okay, so you really just mix all this stuff up and shape it into balls. (OMG, I’m not even allowed to help with that—what’s the big deal, a little fur?) Then you sequester your balls away for a few days in an airtight container so the flavor can mellow. Five days is about ideal. But it’s hard to be away from your balls for five days. You might find yourself opening the container and sniffing your balls every so often, wondering if they’re ripe.

If your balls are Scottish, Canadian, or Japanese, they’re whisky balls.

If your balls are American or Irish, they’re whiskey balls. As a rule of thumb, if your country has an “e” in the spelling, so does your whisk(e)y and any balls made therefrom.