Today the whole family’s out looking at our new headquarters, so naturally I’m wondering what I can get up to.

But without thumbs it’s hard to get up to much. 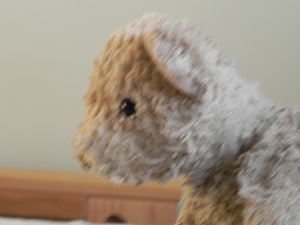 And then there’s this raging, fur-blasting headache. Did my parents offer me a painkiller for it before they left? Noooo. They helped themselves to 400mg ibuprofen each, then stowed the bearproof container on an upper shelf.

So why do we all (minus the kiddies) have this thwacking great headache? Reluctant as I am to blame SHOOFLY SHIRAZ (2010), the evidence is pretty solid. Two glasses of red wine shouldn’t do such a number on the old brain pan. 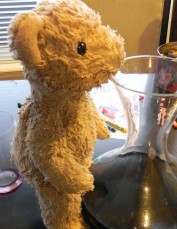 Red wine, along with Scotch, bourbon and anything dark, is famous for causing headaches. But the evidence tends to be anecdotal and fraught with variables. How many drinks? At what level of hydration? With or without carbonation? Consumed exclusively or mixed with different alcohol types?

It’s red wine that gets the worst rap. Why do some wines inflict more next-day head pain that others?

According to Winegeeks, from which I swiped much of my information, the cause of red-wine headaches hasn’t been precisely determined. But here are some suspects:

Individual susceptibility is also a factor. We all know people who avoid red wine because of headaches; likewise, plenty of people/bears enjoy a glass or three without ill effect. Our little tasting crew falls into this latter category, so when we find ourselves reeling around gripping our heads the morning after splitting one 750mL bottle of SHOOFLY between us, something’s up with that wine.

What about that SHOOFLY? 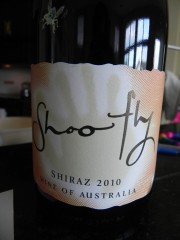 The 2010 vintage may be a little young. Even after we let it breathe a good 45 minutes, it exuded fresh yeast along with a rush of ripe berries and black fruit. Vinified from super-ripe grapes harvested from old vines around Adelaide, SHOOFLY is fruit-lush yet parchingly tannic—not massive but large and reasonably well structured. The finish is perhaps a little clipped.

Like many an Aussie Shiraz it packs a 14.5% wallop. It’s less a symphony than a kick-ass rock concert. Damn, I liked it last night. It even made my parents’ conversation about moving and finance a bit less boring.

Still, SHOOFLY isn’t tame. Maybe a year in the bottle would help it—but will the headache genie still come out with it? It’s a wild animal all right. I woke up with it clawing my melon from the inside like some scrofulous koala yammering sweet nothings at my two brain cells. I barely got through today.

What’s important, though, is that SHOOFLY is yummy booze for $18. And if someone will just open the Advil bottle for me, I’ll forgive it anything. Hell, if we had a second bottle I’d drink it right now. But I’d need help opening it.