Does a bear bathe in the woods?

Ever wonder why drunken sleep doesn’t seem to provide any real rest?

You know the scenario: You’ve just drunk a dozen beers, peed a dozen times and reached that state where you look in the mirror and think, OMG, is that really me? Then your stomach starts lurching, you feel like you’re on a boat, and your dinner starts offering to show itself again. Let’s say you manage to control the reverse peristalsis (against your body’s wise wish to expel toxins). You congratulate yourself for holding it down and stagger into bed with your boots still on. 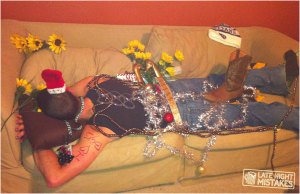 Typical Monday night. If you’re with friends, they cite the boots-on rule and mark you up with Sharpies. If you’re alone, you simply remain unconscious for five or six hours, then finish out the night sleeping fitfully. Either way you wake up feeling like ass, swearing you won’t do it again, and wondering why the six hours you spent on top of your bedcovers seemed to do you absolutely no good.

Whoa! Another reason to feel like crap after a bender! Not only do you wake up dehydrated, thirsty, worried about the shit you probably said and did, not to mention scribbled all over—your sympathetic nervous system has effectively been awake most of the night for no good reason. That sucks!

According to the study, suppressed parasympathetic activity correlates strongly with insomnia. If you habitually down a few drinks before bedtime, you might end up having difficulty:

This all struck me as pretty unacceptable, so I contacted Seiji Nishino, director of the Sleep & Circadian Neurobiology Laboratory at Stanford: 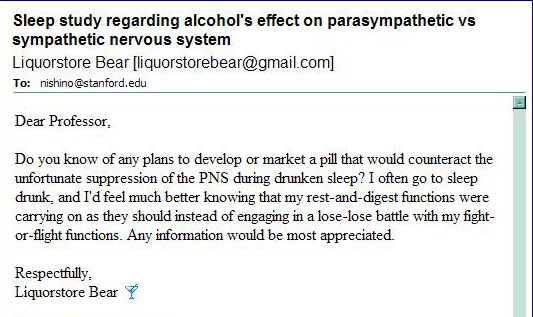 He looks like a nice enough guy, so I expect he’ll come back with an answer fairly quickly, although being a psychiatrist he must be inundated with nuts asking him questions. I will be patient and drink some Malibu while I’m waiting.

3 thoughts on “The nasty truth about alcohol and sleep”